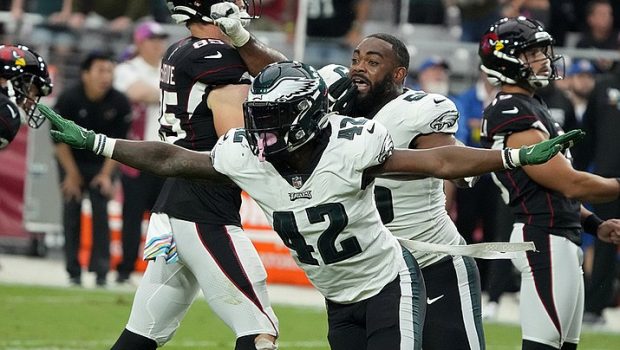 EAGLES HAPPY TO BE 5-0, COWBOYS NEXT SUNDAY A MUCH TRUER TEST!

The Eagles played a somewhat less than average game against the Arizona Cardinals Sunday in Glendale Az., but still came back home with a 20-17 victory.

A 23 yard field goal by substitute placekicker Cameron Dicker with 1:45 remaining in the 4th quarter gave the Birds their 5th straight win — they’re the only unbeaten team in the NFL. Two rushing TD’s by QB Jalen Hurts were the only scores the stingy Cardinals defense would give up, holding the Birds to a season low 20, but still good enough to secure the win.

They were also aided by Cards QB Kyler Murray’s bonehead play, sliding 1 yard short of the 1st down as precious seconds ticked off, leaving K Matt Ammendola to boot a game-tying FG that went wide right giving the Eagles the closest win of the season to date.

Next Sunday the Eagles host the Dallas Cowboys on Sunday Night Football, a true test on where this team stands in the NFC East division.