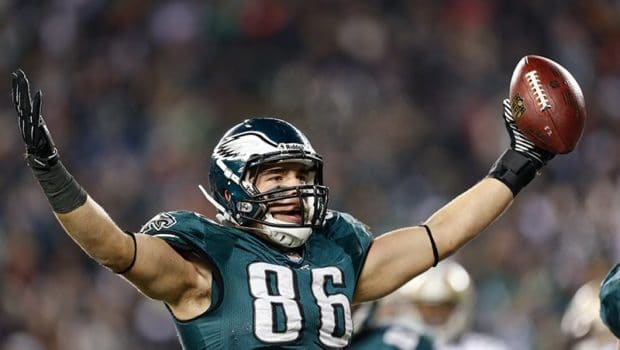 EAGLES HAMMY UPDATE! EVEN A 60% ZACH ERTZ WILL CRUSH BRONCS!

Eagles coach Doug Pederson says tight end Zach Ertz will play today against the Broncos at the Linc even though his hammy is troubling him.

Even a 60 percent effective Ertz should be enough.

While the Broncos’ corners can take just about any receiver out of the game, they haven’t been able to cover tight ends. The Broncos have given up 233 yards and two touchdowns in the last three games alone.

Eagles QB Carson Wentz is going to look to his favorite target in tight end Ertz often and with good reason.

The Eagles’ tight end Zach Ertz has emerged among the leagues best at the position. Ertz is currently tied for second in the league with six touchdown catches.

The Denver defense won’t be able to take him out of the game completely, but they must put together a better performance than weeks past.