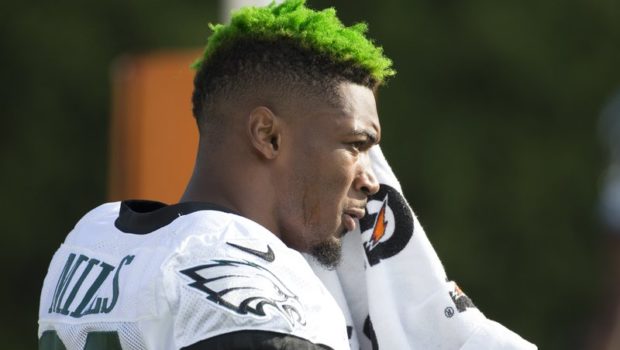 Every member of the Eagles coaching staff loves rookie cornerback Jalen Mills, green hair and all.

In training camp, Mills, a rookie seventh-round draft pick, was clearly ahead of not only Eric Rowe, who was later traded, but other holdovers JaCorey Sheppard and Randall Evans, who were later cut.

Monday night, Mills will get his chance on the big stage when he is expected to start at cornerback for injured Leoidis McKelvin at Soldier Field against the Chicago Bears on Monday Night Football.

Mills said after practice Thursday he hasn’t been told anything and that he’s practicing the same way he always does. All indications are however that McKelvin will be out and Mills will start.

The Answer: Not having any idea he would end up in the same city, the first pro jersey Mills ever owned was that of Hall of Fame basketball star Allen Iverson.

The Other Football: Basketball isn’t his favorite sport, though, it’s soccer. Mills played in high school at DeSoto (Tx) High and says he could play any other sport he’d be a forward for the U.S. National Team. His favorite players are Lionel Messi and Cristiano Ronaldo.

The Honey Badger: The player Mills tries to model his game after is that of his former LSU teammate, Tyrann Mathieu, now with the Arizona Cardinals.

The Draft Drop: You’ve heard the story by now. Mills thought he would be no worse than a third-round pick, but fell to the seventh round. There was a broken leg that caused him to miss half of the 2015 season, and maybe more critical a 2014 arrest for hitting his girlfriend, although charges were dropped when she recanted.

The Versatility: Mills played safety his senior year at LSU. The Eagles like him at cornerback. His old college coach, Les Miles, thinks either is fine. “He’s very bright,” Miles said. “I think safety is certainly a place he can play. He can also play in coverage. You’re looking at a guy who can line up in the slot, or if you get a guy nicked up, he can step up and play corner in a heartbeat.”