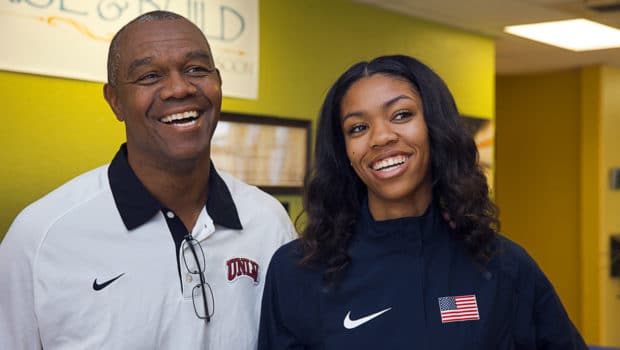 The teenage high jump phenom lives at home and carpools to practice. Same with the 30-year-old American record-holder in the shot put.

These two medal hopefuls at the Rio de Janeiro Olympics also have this in common: A father for a coach whose last name is certainly recognizable to most football fans.

Vashti Cunningham’s dad is longtime Philadelphia Eagles quarterback Randall Cunningham (above), who built a track club in Las Vegas to help his daughter — and son — soar to new heights in the high jump. Michelle Carter’s father is Michael Carter, a stalwart defensive lineman who used to routinely drive 340 miles roundtrip to offer her shot put tips. Anything for their kids.

Being down a touchdown on the football field isn’t nearly as pressure-packed as watching their children from the stands.

Randall began coaching his daughter and his son, Randall II — now at Southern California — when they were just kids. A standout in the high jump in high school, he turned his focus to football at UNLV because the school didn’t have men’s track and field.

He’s part mentor, part instructor but most of all, dad.

And dad certainly knows his stuff. Three months ago, 18-year-old Vashti became the youngest woman to win the event at world indoor championships in Portland, Oregon. Soon after, she signed a deal with Nike. Her brother recently won an NCAA high jump title.

“Good genetics,” said Randall, who coaches a track team in Las Vegas called the Nevada Gazelles. “I put confidence in her to jump (high). She trusts her dad. A lot of people who don’t know the sport and try to coach their kid fail because their kid doesn’t trust them.”

She diligently listens, too.

“We have a good relationship, because he knows my limits, as far as my father and my coach,” Vashti said. “I can’t go in there and mess up with the knowledge he’s transferred to me.”

It’s not like the silver medal he captured at the 1984 Summer Olympics was hanging around the house or anything.

In seventh grade, Michelle expressed a desire to try the shot put. At first, dad was a little hesitant, thinking maybe she was enticed by someone who informed her that he was once a thrower.

Not the case, she insisted.

Michael worked with her through a record-breaking high school career, and thought his coaching days were done once she went to the University of Texas. But he was asked to help out and so he drove from Dallas to Austin every two weeks to offer some guidance.

Dad certainly knew his shot put, too. Michelle has blossomed into one of the world’s top throwers, winning six U.S. outdoor titles. She also set the American outdoor record of 66 feet, 5 inches (20.24 meters) in 2013 and broke the nation’s indoor mark with a throw of 66-3 3/4 (20.21) to capture a world title in March.

Usually not one to show much emotion, Michael bubbled over when he hugged her back stage after her record-setting win.

“My daddy is a big, old teddy bear,” Michelle said. “I’m glad we’re able to share those moments together.”

Not too long ago, Michelle tried to buy a house. When it fell through, she moved in with her parents until after the Olympics.

Michelle and her dad carpool to practice most days, along with their dog named Ryder. While Michelle throws the shot at practice, Michael tosses the ball to Ryder.

And when they get home, they talk shot. They’re always talking about the shot put, even when they say they’re not going to.

“It’s hard for my dad to leave it out of the conversation,” Michelle said.

“It consumes your whole life.”

Just like football once did — for Michael and Randall.

The two gridiron greats hadn’t seen each other in decades before crossing paths last March at the world indoor. At first, Randall didn’t recognize Michael until he scrambled to put on his glasses and read the name on the credential of the big man standing in front of him.

“Of course I remember him — a great player,” Randall said.

Now they’re both coaching their daughters, who are both strong contenders for Olympic medals.

“No one can teach our child better than we can because of knowledge we had in the beginning,” Michael explained. “If there was someone to come along and take it beyond where we can take it, that would be fine. So far, haven’t found anybody.”