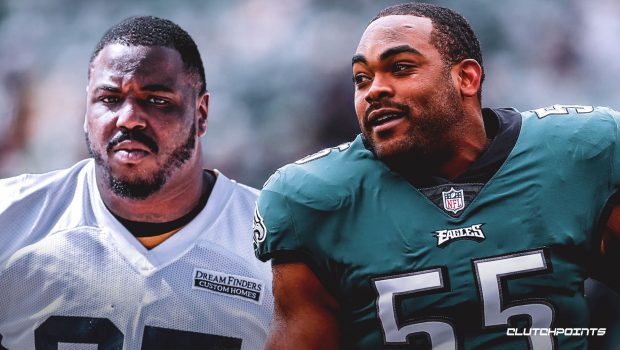 Eagles defensive lineman Brandon Graham can hardly contain his giddiness about his new linemate Malik Jackson, whom the Birds signed as a free agent:

“I think we have a chance to do something special, but we also know that we’ve got a lot of work to do and that it’s a long, long season,” Graham told Eagles.com. “I’ve seen what we did in the offseason. Bringing in a guy like Malik (Jackson, defensive tackle) sets the tone for the entire defensive line. The way he works and how he plays, that right there is a good example for all of us.”

Jackson signed a three-year, $30 million contract after spending three seasons with the Jacksonville Jaguars. The former fifth-rounder won a Super Bowl with the Denver Broncos and has tallied 32.5 sacks in his seven-season career.

Coming off a Super Bowl win in 2017, the Eagles surprised many after a late-season push to the playoffs in 2018 led by quarterback Nick Foles, who since departed in free agency, ceding the reins to franchise signal-caller Carson Wentz.

“We have a lot of hungry players here. You have to look ahead, but at the same time, we feel we left some business on the field last year in the playoffs,” Graham said. “So, we’re just trying to put it all together and make us another run. It’s going to be a lot of fun.”

The Eagles kickoff the 2019 regular season at home against the Washington Redskins on September 8.