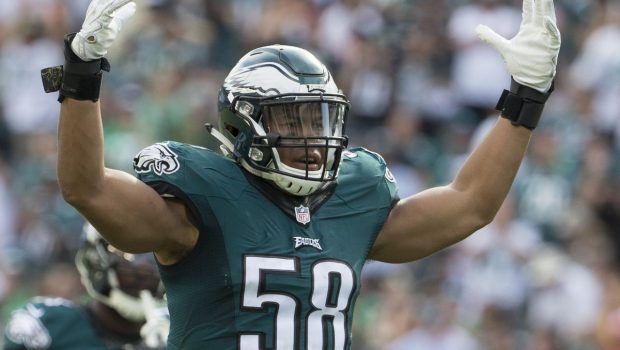 Not to put too fine a point on it, but the Eagles simply outplayed the Jags on Sunday to win 24-18 in London.

Birds edge defender Brandon Graham got the better of left tackle Josh Walker for most of the afternoon, as he generated multiple pressures and was a force against the run, as well.

With the way Jacksonville utilized the middle of the field with passes to running backs and crossing routes, there was a lot of pressure on the Eagles linebackers.

However, both Nigel Bradham and Jordan Hicks (above) had solid games, as they limited big plays by making good tackles after the catch.

Injuries forced the Eagles to work their way through four different offensive line combinations by the start of the second quarter with Isaac Seumalo and Halapoulivaati Vaitai playing two different positions apiece.

The constant for the Eagles was their interior offensive line getting movement on the Jags’ stout defensive tackles. The chopping and changing up front led to some understandable communication breakdowns, but when it counted, the Eagles’ offensive line came up with the key drive to help Wendell Smallwood close out the victory.

Carson Wentz didn’t let the Jags’ defense dictate where he went with the ball throughout the game, looking for and completing passes in all areas of the field. His interception came on an exceptional read by Jalen Ramsey to cover a miscommunication to the left side of the defense and was a blip in an otherwise solid performance. When the Jags got pressure on Wentz, they had some success, but Wentz and his receivers made them pay when he was kept clean.