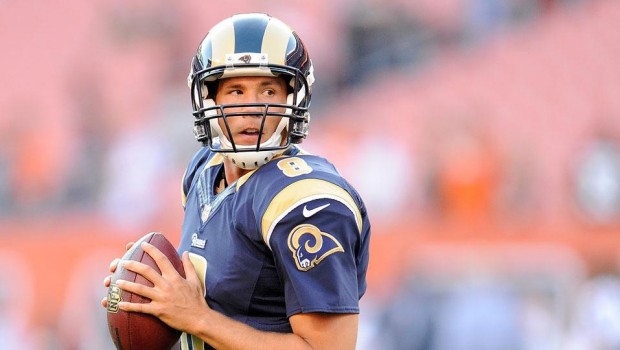 WHY EAGLES GOT THE BETTER OF THE BRADFORD-FOR-FOLES TRADE

If you are confused or bummed out about Eagle Supreme Leader Chip Kelly’s latest move — Sam Bradford (photo above) and a fourth-round pick to the Eagles with Nick Foles and a fifth-round pick and conditional second-round 2016 pick going to the Rams — read CBSSports.com’s Pete Prisco’s take on it.

He thinks the Birds got the better of this deal:

What it means for the Rams: It means the talk that Bradford was their guy, which Jeff Fisher said over and over again at the combine, was all hot air. They decided to get rid of the injury-plagued Bradford for the younger Foles. Both have one year left on their deals, but Bradford’s contract is in the $12 million range. Foles is much cheaper at $1.45 million. But Bradford was playing his best football two years ago before suffering a knee injury. In Foles, the Rams will be getting a 26-year-old passer who seemed to regress last season. He threw 27 touchdown passes and two picks in 2013, but those numbers fell to 13 and 10 in eight games last season before Foles broke his collarbone. His mechanics were bad when he was on the field, and it showed up in his turnovers. In the Rams’ run-heavy offense — isn’t that the Jeff Fisher way? — Foles will be asked to hit deep passes off play action. At times, he has struggled with that. This might be a one-year test. Who knows? Maybe the Rams still make a move to go up and get Marcus Mariota? If Bradford starts eight games for the Eagles, the Rams will also get a 2016 second-round pick.

What it means for the Eagles: I thought the Eagles would be the team to get Mariota, but this likely takes them out of it after getting Bradford on the heels of re-signing Mark Sanchez. Bradford is coming back off a second knee injury he suffered in the preseason last year. So there are obvious durability questions. Bradford threw a combined 35 touchdown passes and 17 interceptions in 2012 and 2013 in 23 games. There is talent there — if he’s on the field. In Chip Kelly’s offense, where the ball gets out quick, Bradford could be better. The word is Kelly loves Bradford. This could lead to Bradford having a career rejuvenation. I would expect the Eagles to give him a short-term extension to alleviate the big cap number.