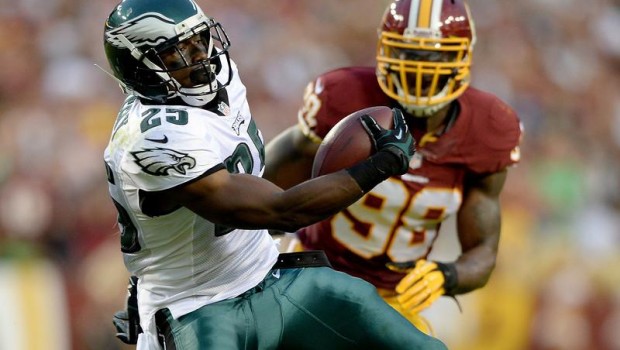 WHY HAVE EAGLES GONE FROM NFL’S BEST GROUND GAME TO ONE OF THE WORST?

The Eagles “controversy” that won’t go away, and which dominated the dialogue all week on talk radio, in coffee shops and bars, is why did Shady McCoy (running against Washington in photo above) wasn’t on the field in the Birds’ last drive against the Rams and Darren Sproles was.

Or, more to the point, why can’t the Eagles run the ball?

The easy answer is to blame injuries along the offensive line. That is only part of the answer. The Eagles problems run deeper than the injuries they have up front.

Last year, the Eagles were able to dominate the league on the ground by getting their outside zone game and sweep plays cranking early on and then countering with quick, inside zone plays that allowed LeSean McCoy to hit huge plays up the middle since LBs were flowing so hard outside.

This past weekend, the Eagles were noticeably heavy with their inside zone runs and my guess is that they were doing that because Chip Kelly knows that this offensive line would simply give up too much penetration to consistently get the outside zone game going. McCoy isn’t running with the confidence we saw from him last season, but the problem that most people won’t see or might avoid is that Nick Foles is hurting this offense.

On at least two occasions Foles could have made automatic throws to the perimeter when the Eagles had numbers in their favor, but he handed off instead. Many teams (including the Eagles) have “automatics” where a QB can break from the called running play and make a quick throw to the perimeter if he feels like the matchup is in his favor. Foles had opportunities to do this, but didn’t see them.

Why does this matter to the run game? The more pressure Chip Kelly is able to put on defenses vertically, the greater the opportunity to create run game creases since LBs and safeties will be leery of the ball getting outside in space.

The biggest issue of all with Foles is the one that everyone expected to be an issue last year – he won’t pull the ball and run it when he should on zone read plays.

Teams are playing man to man outside on the Eagles WRs because there is no DeSean Jackson to terrorize the safeties anymore. With the extra safety in the box and with a below average offensive line in front of him currently, there is very little room for McCoy to run.

Defenders on the perimeter are crashing down hard on the backside paying very little attention to Foles. At some point, if the Eagles want to get their offense back on track, Foles is going to have to start making defenses pay by keeping the ball and gaining chunks of yards in the massive space that is sometimes available to him on zone reads. The other thing he’ll have to do is make secondaries respect his ability to hit them for big plays down the field.

From guard to guard, the Eagles are not very good right now and Lane Johnson looked gassed and sluggish in his first game back from PED suspension. It could take longer for the Eagles to finally get their offense back on track than some people think so don’t expect a magic fix just because they got their right tackle back. The issues in Philly run much deeper than that.