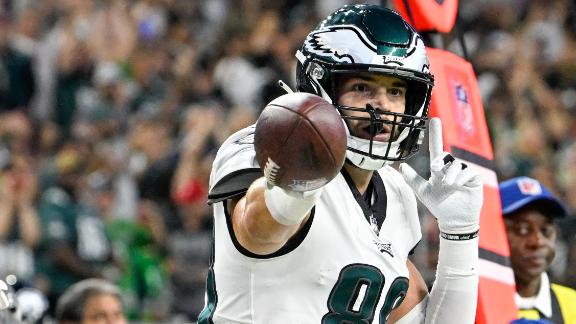 The Eagles have opened the 21-day practice window for tight end Dallas Goedert, which means he is eligible to return to the active roster as early as this week ahead of the team’s game in Chicago.

Goedert has missed the past four games with a shoulder injury suffered in the Monday night Week 10 game against Washington.

He had accumulated 43 receptions for 544 yards and three touchdowns – all third on the team behind A.J. Brown and DeVonta Smith.

At the time of his injury, Goedert led all NFL tight ends in yards per catch, and was second in receiving yards and 20+ yard catches. He was also fifth among all NFL players in yards after the catch.

Jack Stoll, Grant Calcaterra, and Tyree Jackson all stepped up to fill the void with Goedert sidelined. Stoll has six catches for 68 yards and Calcaterra has four for 41 in Goedert’s absence.