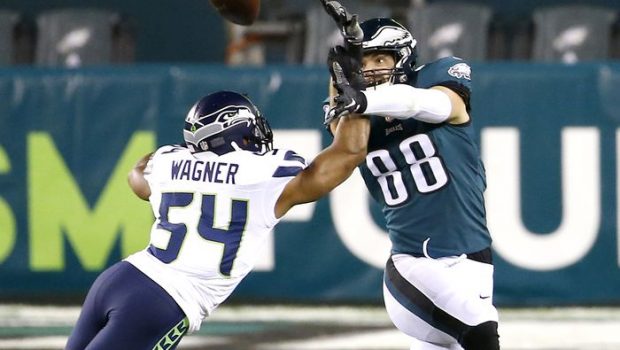 Eagles tight end Dallas Goedert is taking the fall for their failed comeback the other night against the Seahawks.

It ended when quarterback Carson Wentz threw a pass right to Seahawks safety Quandre Diggs. Many people thought it was Wentz’s fault, but Eagles tight end Dallas Goedert said he was actually to blame.

Goedert said he went to the inside when Wentz expected him to go to the outside, and Goedert took responsibility for the miscommunication.

“I tried to work the leverage [on Wagner],” Goedert said yesterday “I was kind of [sliding] inside so he wouldn’t be able to break up the play and I’d be able to make it. Carson thought I was going to be going down and away and threw it there. I should’ve been where he thought I was going to be. I’ll take the blame for that one. It was a crucial point in the game. Mistakes like that can’t happen.”

There’s been plenty of blame to go around in this disastrous Eagles season.