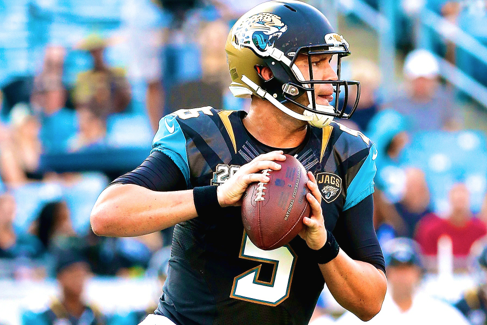 EAGLES SHOULD BE GLAD THEY WON'T FACE JAGS' BORTLES

The last time Blake Bortles played at Lincoln Financial Field, he threw for 404 yards and four touchdowns as he led Central Florida to a comeback 39-36 victory over Temple.

And the Eagles should be very glad he will be on the sidelines this Sunday when his Jacksonville Jaguars open the season at the Linc.

The Jags’ first-round draft pick was considered an eventual franchise quarterback, yet one who would learn for a season behind Chad Henne and then ease into his role. He’s eased in, all right. After only three preseason games, wide receiver Cecil Shorts III told Yahoo Sports that Bortles and Henne “both give us an equal chance to win.”

This isn’t anything against Henne, though. The seven-year veteran has improved over last season’s solid performance and has played well in preseason. Shorts said, “We’re all behind him.”

It’s more that Bortles’ progress and poise have been so impressive that it feels like there are two No. 1 quarterbacks: one on the field and one who is already in a position to take over. Henne and Bortles both take reps with the No. 1 offense, and both have their own media availability. Head coach Gus Bradley even said Bortles will continue to take “a couple” reps with the No. 1 offense in practice after the season begins.

Bradley and Bortles have consistently said a redshirt season was “always the plan” for this year, but the rationale for that plan included the Jags’ prior problems with Blaine Gabbert. That first-round draft pick was thrown into play as a rookie in 2011 and struggled tremendously. Although Bradley wasn’t with the team then, the mistake has reverberated here ever since.

But here’s what’s become all too clear in one short month: Bortles could not be more different than Gabbert.

While Gabbert seemed to shrink under pocket pressure, Bortles has thrived. He has been compared to Ben Roethlisberger in his ability to withstand the pass rush and move deftly for someone who is so difficult to tackle. Although the Bortles vs. Ben discussion is still premature, it’s clear that the rookie out of UCF is unfazed by defenders’ close presence and his own errors. Bortles has had footwork mistakes and poor throws, and he responds as if it never happened. That was not something Gabbert was known for.

“His demeanor is very impressive,” said backup quarterback Ricky Stanzi. “When I was a rookie, my head was spinning.”

Asked if he’d ever seen Bortles rattled, Storm Johnson, a rookie running back who played with him at UCF, shrugged: “No.”

This poses an unexpected problem for Bradley: rather than risking too much rookie-year playing time for Bortles, is there a risk of too little?

Bradley acknowledged last week that it is possible Bortles won’t see the field after this week’s preseason finale against the Atlanta Falcons until next preseason. After all, there is no indication from anyone that Henne’s job is at risk. So if Henne is healthy and maintains his performance, the moment everyone in this town is waiting for could theoretically be far off. Is that a bad thing rather than a necessary thing?

Bortles has a ready answer for this: “Going against our No. 1 [defense] is like going against any other No. 1 defense.”

Well, yes and no. It’s not game action, and it’s not really going against a No. 1 defense if Bortles gets only “a couple” reps per practice.

Most quarterbacks will acknowledge learning happens faster in games. “Is practice as fast as on the field?” asked Stanzi. “Probably not. Getting game reps is the best way to go. You get further, faster. You can make a throw and test the waters and realize you can do this, or you can be overconfident, only to realize, ‘Oh [expletive].”

There’s also the argument that watching is valuable. Aaron Rodgers is a perfect example of that. So is another backup to Brett Favre: Mark Brunell. He held a clipboard for two years before moving here, taking the Jags to the playoffs in their second year of existence, and going to three Pro Bowls. Brunell certainly didn’t get stale on the bench.

“It did help – me not playing,” Brunell said Tuesday. “I observed. Sitting was the best thing for me.”

Yet the way Bortles has attacked the playbook and practices, it’s hard to believe he’ll wither even if he sits a full season. That will likely protect Bradley from second-guessing at least for a few games.

“Blake has shown in preseason that if he was on the field, he would do just fine,” Brunell said. “He looks like he’s been there three or four years.”