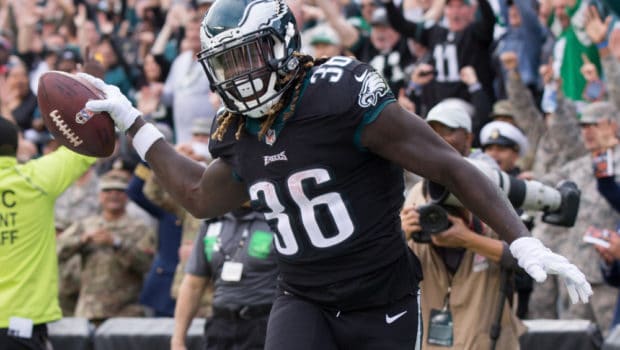 EAGLES-GIANTS THIS SUNDAY: EVERYTHING YOU NEED TO KNOW!

What with Carson Wentz injured and out for the season and the Eagles wrapping up the NFC East title with last Sunday’s 43-35 win over the Rams, lest not forget that there are still three games to play:

EAGLES — Second Nick Foles era begins with QB Carson Wentz out with season-ending knee injury. … Eagles have won six of seven and 15 of last 19 against Giants … clinched 10th NFC East title last week and 25th all-time playoff berth. … Eagles secure first-round bye with win and NFC’s No. 1 seed with win and loss by Vikings. … NFL’s highest-scoring offense averages 31.1 points per outing. … 2017 is third time has started 11-2 or better through 13 games. Eagles went to Super Bowl in those other two years, 1980 and 2004. … Foles was 6 of 10 for 42 yards after replacing Wentz in fourth quarter against Rams and finishing off victory. … Eagles averaging 143 yards rushing, No.2 in league. … WR Alshon Jeffery has eight TD catches, six in last six games. …DE Brandon Graham ran in fumble for TD last week. Graham leads team with 8 1/2 sacks.

FANTASY — Eagles RB Jay Ajayi has scored one TD this season. With Foles at QB, look for Philly to utilize No. 2 ranked run game against No. 31 ranked run defense. Ajayi should cash in coming off 15-carry, 78-yard showing against Rams.

0 thoughts on “EAGLES-GIANTS THIS SUNDAY: EVERYTHING YOU NEED TO KNOW!”