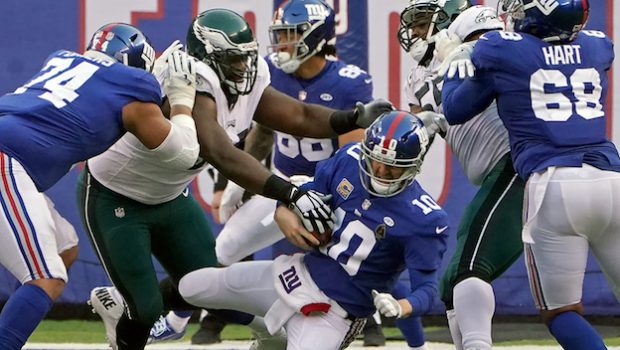 EAGLES-GIANTS IS A GRUDGE MATCH NO MATTER WHAT STANDINGS SAY!

Sunday’s game against the Giants at the Linc might not have the playoff importance it was thought to have had when the schedule was announced last spring.

But for Eagles Nation it is still a grudge game against a hated rival.

The Eagles will attempt to snap a two-game losing streak.

Despite last week’s frustrating 48-7 loss at New Orleans — the worst loss ever by a defending Super Bowl champion — the Eagles (4-6) can still climb back into the wide-open NFC East race.

Even the Giants (3-7) are still alive in the division thanks to a two-game win streak, including last week’s 38-35 thriller against the Tampa Bay Buccaneers.

Despite two teams with losing records, this is a critical contest for these longtime rivals.

“We’ve got to get back to work,” Eagles coach Doug Pederson said. “New York Giants, division game, right in front of us, in fact three games in front of us with our division. We have to quickly erase Sunday. We have to learn from Sunday, never to let that happen again as coaches and players and move on from that. And again, you’re two games out, and it’s a great opportunity this week to make one step closer to your goal.”

The Eagles get a boost from the return of injured defensive tackle Tim Jernigan. But the rest of the team remains quite banged up as four cornerbacks — Jalen Mills, Sidney Jones, Avonte Maddox and Rasul Douglas — all sat out practice Wednesday. Running back Darren Sproles and linebacker Jordan Hicks also are questionable.

Quarterback Carson Wentz is coming off arguably his worst game in an Eagles uniform, going 19 of 33 for 156 yards, no touchdowns and three interceptions.

“The product we’re putting out there is not up to our standards,” Wentz said. “I’m not playing up to my standards, but we know the talent we have.”

Giants rookie running back Saquon Barkley was named the NFC Offensive Player of the Week following his effort against Tampa Bay. He rushed 27 times for 142 yards, accounted for three touchdowns and became the first New York rookie to receive the honor since tight end Jeremy Shockey in Week 17 of 2002.

Eli Manning played one of his best games in recent seasons by completing 17 of 18 passes for 231 yards, two touchdowns and no interceptions.

“I think there is some excitement going around,” Manning said. “It is good. It is a good feeling to have in the locker room and you see some growth. You see the improvement.”

The Giants started the season 1-7.

“We’ve got a long way to go. There are a lot of things we’ve got to get better at, but if we can just keep battling and fighting, who knows?” Giants coach Pat Shurmur said. “That would be a fun thing for everybody to write about.”

The last time the Giants put together at least a two-game winning streak was December of 2016 when they beat the Dallas Cowboys and Detroit Lions. The 38 points scored against Tampa Bay were their most since putting up 49 against the New Orleans Saints in 2015.