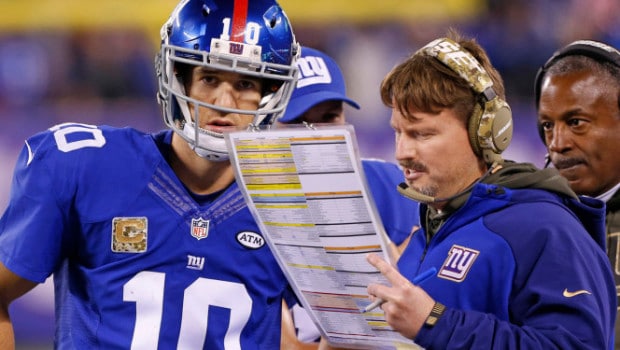 EAGLES-GIANTS: BIRDS BATTLING THEIR COACH WHO GOT AWAY!

Today’s Eagles-Giants game at MetLife Stadium has an intriguing subplot:

It’s the Birds against the coach that got away!

Ben McAdoo, after two seasons as Giants offensive coordinator, was out of work and the hated Eagles had a job opening for head coach.

“I went down and put my cards on the table and swung for the fences,” McAdoo told the New York Daily News. “I’m glad things shook out the way they did. I look better in blue.”

McAdoo interviewed to replace Chip Kelly as the Eagles coach in January before the Giants promoted him to replace Tom Coughlin. Sources have said that McAdoo was very impressive in his one interview with the Eagles and was in excellent position to be offered the job.

“When it happened, I needed a job,” he said. “So I needed to make sure I was thinking of my family first. I thought an opportunity to interview for a head coaching job in this league was something you couldn’t pass up. It’s an organization I’m obviously familiar with.”

McAdoo hit the Giants bye week at 4-3. The job is not too big for him. He’s not in over his head despite dealing with “three dumpster fires every day.”

It’s difficult to predict how a coordinator will transition from coaching one side of the ball to coaching the entire team, but so far, it appears he’s growing nicely into the job and could stick around for a while, especially if he can figure out why his offense, his strength, has been a dud through the first seven games.

Is he a better coach than Doug Pederson, another coordinator who made the jump when the Eagles hired him? So far they have the same record.

The Giants pushed Coughlin out the door with a farewell news conference on Jan. 5, two days after they missed the playoffs for the fourth straight season. Within hours of Coughlin walking off the podium in the team meeting room and using his gym privileges in their facility for the next few months, Mara and GM Jerry Reese were interviewing McAdoo.

He was the first one interviewed and the ability to maintain continuity with Eli Manning made him the favorite. It was McAdoo’s second head coaching job interview. The Browns interviewed him following the 2014 season, but hired Mike Pettine, who lasted two seasons and was fired with a 10-22 record. McAdoo was then hired by Coughlin.

The Cleveland job is career suicide as Hue Jackson is finding out. Jackson cancelled an appointment that had been set up to interview with the Giants when the Browns offered him their job and he accepted. Jackson is now 0-8.

McAdoo went down to Philly on Jan. 7 to interview with Eagles owner Jeff Lurie and GM Howie Roseman as the Giants proceeded in their search by conducting interviews with former Falcons coach Mike Smith and former Bills coach Doug Marrone.

McAdoo was in good shape with the Giants, but they were not ready to commit when he went to Philly. He approached the Eagles job with an enthusiasm unknown to mankind, as Jim Harbaugh would say.

The Eagles interviewed Bears offensive coordinator Adam Gase on Jan. 5, but he was hired by the Dolphins on Jan. 9. On Jan. 11, the Eagles pulled off a big surprise by interviewing Coughlin.

By then, it became apparent McAdoo was going to be offered the Giants job. The Eagles had interviewed Pederson, the Chiefs offensive coordinator and former Philly QB and assistant coach, on Jan. 10. But they couldn’t hire him quite yet. The Chiefs had defeated the Texans in the wild-card round one day earlier and were preparing to play the Patriots in the divisional round the next weekend.

The Eagles interview with Coughlin, according to sources, was a disaster. He spent most of the interview complaining how the Giants did him wrong. He was bitter. He wasn’t forthcoming about his plans for his staff. Many of his long-time assistants were going to remain and work for McAdoo. The Eagles went into the interview with a lot of respect for Coughlin and really wanted to like him, but felt he was more concerned with making the Giants look bad than making the Eagles look good. By the time he left the room, he had eliminated himself as a candidate.

McAdoo interviewed a second time with the Giants on Jan. 13. On Jan. 14, they hired him, the same day Coughlin withdrew his name from consideration in Philly. The Chiefs lost to the Patriots on Jan. 16 and two days later hired Pederson.