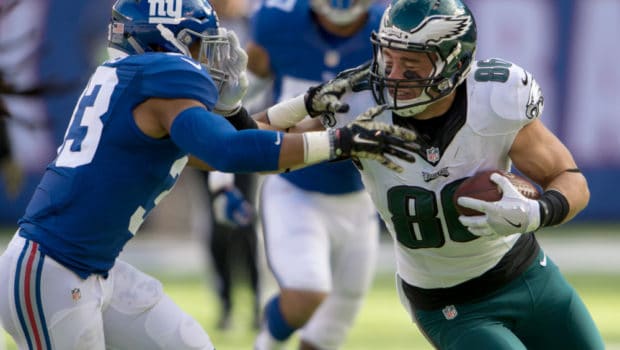 The matchup: The Giants believed they had the pieces in place for a Super Bowl run, but a 0-2 start has exposed a lot of holes, especially on offense. The line has struggled to protect QB Eli Manning, who’s been sacked eight times in two games. With WR Odell Beckham Jr. coming off an ankle injury, free agent WR Brandon Marshall must deliver. He’s struggled mightily so far. CB Janoris Jenkins (ankle), appears to be a gametime decision. … Philly is coming off a loss, but QB Carson Wentz has been solid; WRs Alshon Jeffery and Torrey Smith have impressed, and the defensive front seven has been dominant at times. But the running game has been ineffective, and the porous O-line has Wentz running for cover. Expect to see the ball in the air about 75% of the time for both teams:

0 thoughts on “EAGLES-GIANTS AT 1, RAVENS-JAGS IN LONDON: TODAY’S FULL SKED!”