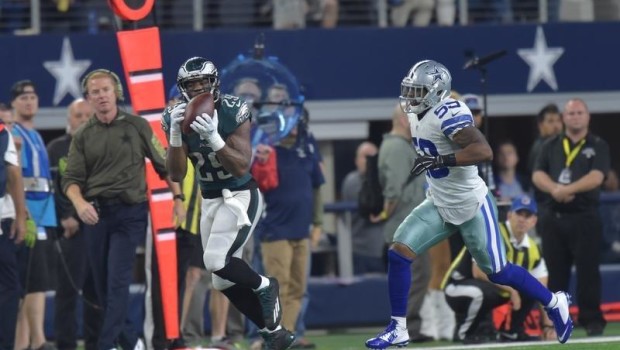 The Cowboys on Sunday had to witness DeMarco Murray (above) find success in his first return to AT&T Stadium since departing in the offseason for the Eagles. The Cowboys, meantime, have released one back, Joseph Randle, and watched another, Lance Dunbar, suffer a season-ending injury.

For Dallas Cowboys owner Jerry Jones — and for Eagles Nation — it is painfully (and joyfully) obvious:

Last night’s wild 33-27 overtime loss to the Eagles has stirred memories of 1989.

That was the year Cowboys finished 1-15. It was also the last time the Cowboys lost six straight games.

“It feels like that,” Jones said, later adding, “But we know we are not talking about the same team here.”

Losses continue on the field. Distractions mount off it. Only midway through, this season has already unraveled in spectacular fashion.

The Cowboys (2-6) have not won since quarterback Tony Romo broke his collarbone Sept. 20 against the Eagles. And they face mounting criticism because of their most significant and controversial offseason addition: Greg Hardy.

Beginning with the sexist comments the defensive end made when he returned from his four-game suspension for violating the league’s personal conduct policy, he has caused unflattering headlines and heightened scrutiny. Then came Deadspin last week publishing photos, police interview transcripts and documents in a detailed report of Hardy’s alleged assault of ex-girlfriend Nicole Holder on May 12, 2014.

After Sunday’s game, questions persisted. Cowboys coach Jason Garrett said the Cowboys do not condone domestic violence and take the issue very seriously. He said they expected criticism when they signed him.

Asked whether it was worth it to have Hardy on the roster, Garrett said, “I don’t want to talk anymore about Greg Hardy.”

Jones, outside the team’s locker room, said Hardy has a commitment to the Cowboys to “do the right things.” He repeated that the Cowboys wanted to give Hardy a second chance.

Hardy was not seen in the Cowboys’ locker room during media availability after the game.

On the field, the Cowboys on Sunday had to witness DeMarco Murray find success in his first return to AT&T Stadium since departing in the offseason for the Eagles. The Cowboys, meantime, have released one back, Joseph Randle, and watched another,Lance Dunbar, suffer a season-ending injury.

Darren McFadden rushed for 117 yards Sunday, but Murray had 83 yards rushing and another 78 yards receiving.

“We know that Murray is an outstanding player and not just a running back,” Jones said.

But the Cowboys haven’t lost six straight because of their running game. They haven’t had consistent quarterback play since losing Romo.

Brandon Weeden proved too conservative at times. His replacement, Matt Cassel, threw for 299 yards and three touchdowns Sunday, but he also threw his second pick-six in three starts this season.

“You can say the turnover was the difference,” Jones said, “but I thought as a quarterback, he played well enough to win that ball game with a turnover or some aspect of the game that gave us life.”

Technically, the Cowboys still have a chance to win the NFC East because Romo is slated to return Nov. 22 at the Miami Dolphins. But they play four of their next five games on the road. The lone home game during that stretch is against the unbeaten Carolina Panthers.

“We have to be able to finish games,” tight end Jason Witten said. “The best thing we did last year was that.”

Last season’s 12-4 season is long gone. At least in Jones’ mind, it feels a little like 1989 again. There’s still hope, but margin for error is nonexistent.

As Jones said, “We understand — we can add and subtract – the job we have ahead of us.”