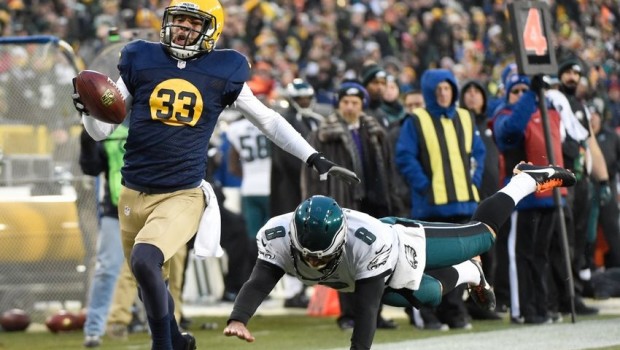 Green Bay’s Micah Hyde ran back a punt 75 yards for an old school TD against David Jones and the Eagles last year.

The Eagles are at Lambeau Field to take on Aaron Rodgers and the Green Bay Packers in week three. That’s the same site and team that beat them, 53-20, in a game that wasn’t even that close. As both teams will in August, the Packers pulled their starters in the fourth quarter of the game last season.

Indianapolis and quarterback Andrew Luck, probably just for a series or two, will open the preseason for the Eagles at Lincoln Financial Field the weekend of Aug. 13-17. Exact dates and times will be announced later.

In week two, the Eagles stay home to take on former assistant coach John Harbaugh and the Baltimore Ravens between Aug. 20-24.

The Green Bay game will be between Aug. 27-31; and the preseason will conclude with the Eagles making the first of three trips to MetLife Stadium to take on the Jets. They also play both the Jets and Giants in the 2015 regular season.