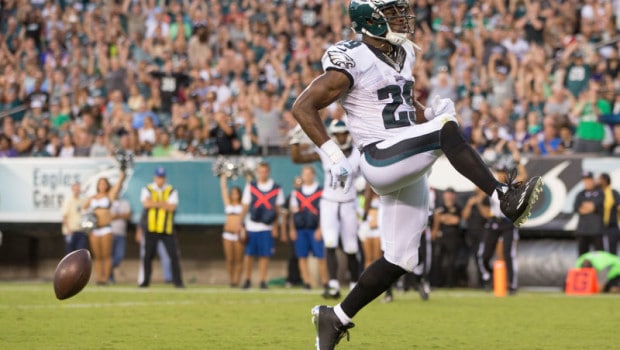 EAGLES GET PICKS FOR 3 BUSTS, $10M IN ALL-IMPORTANT CAP SPACE!

The Eagles are getting rid of three bust players acquired while Chip Kelly was their Supreme Leader, and Howie Boy Roseman’s house-cleaning is only part of the reason:

The Eagles will receive draft picks for the three players. Moreover, they’ll gain about $10 million in space under the salary cap. It’s remarkable that Roseman, who is back in charge, found takers for DeMarco Murray (above) and Byron Maxwell because of their salaries and poor performance.

Kelly was fired one game before the Eagles finished a 7-9 2015 season. His abrupt dismissal came after he went 10-6 in each of his first two seasons and less than a year after he seized control of personnel decisions from then-general manager Roseman.

Murray didn’t fit Kelly’s offense and was a bust. Maxwell wasn’t the shutdown cornerback he got paid to be. Alonso reinjured his knee, missed several games and struggled the entire season.