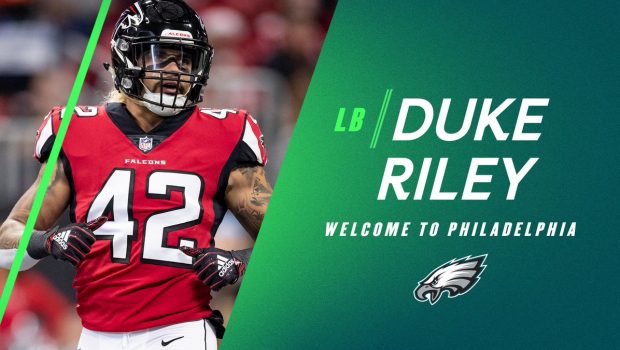 The 2-2 Eagles have the Jets coming up next Sunday at the Linc, and they have acquired linebacker Duke Riley and a 2020 sixth-round pick from the Atlanta Falcons in exchange for safety Johnathan Cyprien and a 2020 seventh-round pick.

A third-year player out of LSU, Riley upgrades the Eagles’ special teams unit that lost linebacker L.J. Fort, who was released on Friday when Orlando Scandrick was signed to help ease the injury situation at cornerback.

The 25-year-old Riley was a third-round pick of the Falcons in 2017. He’s played a total of 78 special teams snaps in four games for Atlanta this season.

The 6-1, 230-pound Riley has suited up in 32 career games with 16 starts in his two-plus NFL seasons. He has 81 career tackles on defense, two tackles for loss, and one quarterback hit. Riley had a personal-best 12 tackles last season in a game against the Saints.