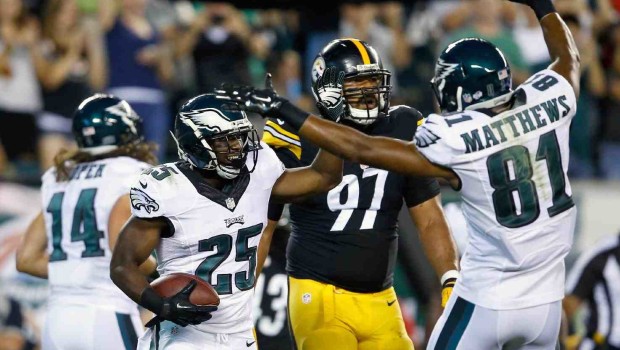 EAGLES GET THEIR ACT TOGETHER AGAINST THE STEELERS

With wide receivers Jeremy Maclin and Riley Cooper starting their first game together, the Eagles (1-2) looked like a different team. The offense churned out 251 yards in the first half en route to a 17-0 halftime lead.

Foles completed 19 of 29 passes for 179 yards and a touchdown in the first half. He did throw his third interception of the preseason – one more than during the entire 2013 regular season – but it did not prove costly.

“I’ve seen improvement from the first game,” head coach Chip Kelly said of Foles. “He didn’t play well against Chicago, but I thought he did against the Patriots. I’m happy where he is, but he’d be the first to tell you he needs to get better.”

Kelly took the words out of Foles’ mouth.

“We still have a lot of improvement to make,” said Foles, who completed passes to eight receivers. “But I’m confident we’ll get there.”

Maclin, hobbled by a sore hamstring during the week, led the Eagles with six receptions for 43 yards in the first half. Cooper, returning from an ankle injury, added three catches for 25 yards in his preseason debut.

LeSean McCoy, bothered by a sore toe this week, and Darren Sproles helped the running game amass 72 yards in the first half — almost matching the team’s total rushing average (82.5 yards) after the first two games.

“It felt good being out there with Foles and the guys running around,” Cooper said. “I felt I did some good things out there. There’s some stuff I would like to take back, but I think you can say that after every game.”

However, the offensive breakout almost came at a cost – a big cost.

The Eagles survived two major injury scares in the first half that could have turned a season of promise into possible disaster.

McCoy left the game with a right thumb injury late in the first quarter after catching a pass and darting 22 yards for a touchdown. However, X-rays were negative.

Maclin, who missed all of last season with a torn ACL, dropped to the ground during a pass route early in the second quarter after his surgically repaired right knee appeared to give out. Moment later, the players and crowd breathed a heavy sigh of relief when Maclin rose to his feet and walked off the field on his own. He returned to the field shortly thereafter.

“If it was fine, I was going to play,” Maclin said. “So, I got up and it was OK. I was excited to get back out there. Thank God, he had my back on that one.”

Foles couldn’t believe his eyes when Maclin popped up.

“The first thing I did was say a prayer for him,” Foles said. “The good Lord had him.”

The Eagles must have been counting their blessings. They simply can’t afford to lose McCoy or Maclin for any length of time.

McCoy, one of the top running backs in the NFL, is the focal point of the offense. Without him, the Eagles’ running game and passing game couldn’t beat Penn State.

Maclin is extremely valuable to the Eagles’ passing game. Although the offense survived – and thrived — without him last season, it couldn’t this season. With the departure of DeSean Jackson, Maclin is now the team’s primary wide receiver. Most of the others are unproven.

Chances are Thursday night’s game marked the first – and last – time the Eagles’ starting offense will play together in the preseason. Most, if not all, of the starters likely will sit out the preseason finale next Thursday night at the Linc against Michael Vick and the Jets.

If it was the final rehearsal, at least the offense went out on a high note, which can do nothing but build confidence entering the regular-season opener Sept. 7 against the visiting Jaguars.

“We’re gonna continue to get better,” Maclin said. “We’ve got a lot of guys who can do a lot of things. I’m excited about the future.”