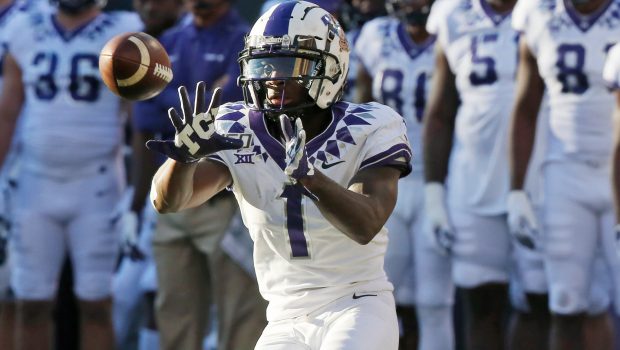 EAGLES GET A BURNER CARSON WENTZ CAN THROW TO: JALEN REAGOR!

Eagles quarterback Carson Wentz finally has somebody to throw to who can catch a deep ball and finish!

The Eagles’ receiver woes have been well-documented to we won’t bore you.

Unlike in 2019, the their draft priority is surrounding Wentz with receiving talent and improving their team speed.

Doing anything else with this pick would have been an extraordinarily unpopular decision, and the Eagles didn’t disappoint their fans by taking Jalen Reagor (5-11, 206 pounds) of Texas Christian, an athletic marvel with a NFL alum in the family: His father, Montae, a defensive lineman, played nine seasons with the Broncos, Colts and Eagles.

Jalen won the state long jump championship in Texas, where he played football for former NFL quarterback Jon Kitna. He can squat 620 pounds, yet was among the fastest receivers in the Big 12. He was also a reliable kickoff and punt returner.

Reagor, who led the Big 12 with 14 touchdown catches and averaged 21.4 yards per catch, has the potential to be a gadget star on the right offense and with the right coaching staff. At the combine, Reagor compared himself to the 49ers’ Deebo Samuel or Chiefs’ Tyreek Hill — whom he said he watched “every day” — while The Ringer’s draft guide likened him to Percy Harvin, which, minus the hip issues, wouldn’t be the worst thing.