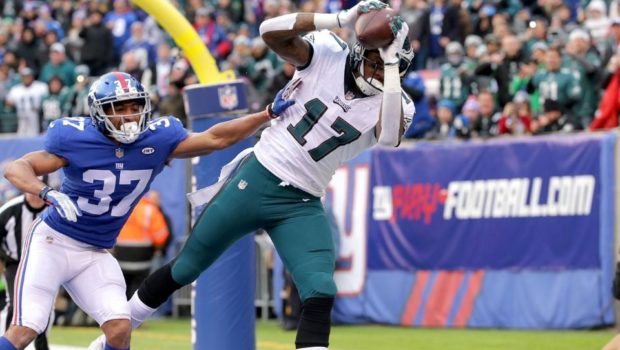 EAGLES UP A GAME OVER VIKES IN NFC PLAYOFF SEEDING!

It’s Monday morning, Dec. 18, and the Eagles still have the Raiders next week and the dreaded Cowboys to play, but they’re looking good, and here’s where they stand in the playoff seeding:

1. xy-EAGLES (12-2): NFC East champion. Life after Carson Wentz had a hairy beginning, but they survived the Giants to ensure themselves at least a first-round bye.

5. Carolina Panthers (10-4): Wild card No. 1. Technically tied for first place but getting swept by Saints keeps Panthers on wild-card path.

6. Atlanta Falcons (8-5): Wild card No. 2. They’ve beaten the Seahawks, Lions and Cowboys, so Atlanta can afford a loss Monday night, though it obviously wouldn’t be ideal. A Falcons win eliminates Green Bay.

2. x-Pittsburgh Steelers (11-3): AFC North champion. After a gut-wrenching loss, they’re now facing the likelihood of once again having to go through Foxborough to reach the Super Bowl.

3. Jacksonville Jaguars (10-4): AFC South leader. They’re playoff-bound for the first time since 2007 and still have a reasonable shot at a first-round bye.

4. Kansas City Chiefs (8-6): AFC West leader. Not only did Saturday’s win over the Chargers give K.C. vital breathing room, but the Chiefs’ schedule now gets quite favorable as they finish against the Dolphins and Broncos. They need win only one of those games to put a bow on the division.

5. Tennessee Titans (8-6): Wild card No. 1. They’re doing their best to drop out of the field. But a 7-4 conference record keeps them ahead of Buffalo and Baltimore. However next week’s date with the Rams looks like major trouble.

6. Buffalo Bills (8-6): Wild card No. 2. They’re desperately trying to snap the longest playoff drought in major North American professional team sports (it dates to 1999). The strength of victory tiebreaker keeps Buffalo ahead of the Ravens, who are being undermined by their defeats of the winless Browns.