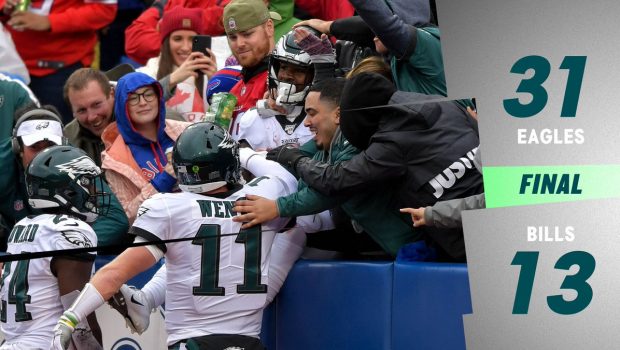 EAGLES GAME OF THE YEAR WIN OVER BILLS EARNS AN ‘A’

As Eagles Nation held its collective breath on Sunday, the Birds played a great game to beat the Bills in Buff 31-13.

Quite a diff from the beatdown Dallas gave them a week before.

So, all the national pundits noticed, such as CBSSports.com, which gave them an ‘A’:

Have to give the Eagles credit after a tumultuous week of controversy inside the locker room.

The Eagles showed up as the team that wanted it more, pounding the Bills defense to the tune of 218 rushing yards (the most ever under Doug Pederson) and scoring 31 points, the only team to score more than 21 against the Bills all year.

The Bills had allowed less than 20 points in five of their six games and the Eagles scored 20 points in the second half alone.

Miles Sanders had 118 total yards (74 rushing, 44 receiving) of offense in just over two quarters, including a career-long 65-yard touchdown run that gave the Eagles a double-digit lead they wouldn’t relinquish.

In heavy rain and wind, Carson Wentz completed 17 of 24 passes for 173 yards and a touchdown, finishing with a 104.9 passer rating.

Wentz also had two runs of 10 yards or more in the fourth quarter on third down as part of a drive that took over eight minutes off the clock and sealed the 18-point win.

This was a win the Eagles needed as they arguably played their best game of the year.