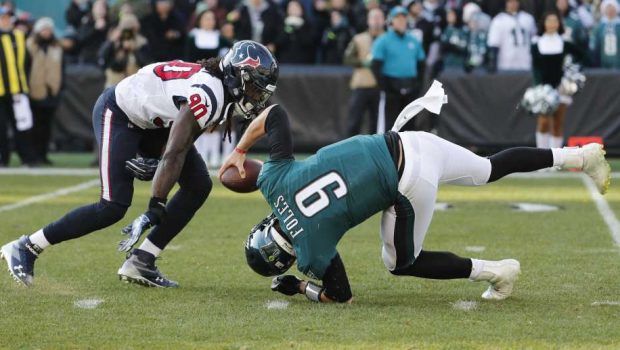 EAGLES FOLES TOOK HIT, KEPT ON TICKING: EVEN THIS SUNDAY!

In case you missed it, Eagles quarterback Nick Foles took a hellacious hit late in Sunday’s 32-30 victory over the Houston Texans:

Turns out it looked worse than it was, although Foles took one play off.

Coach Doug Pederson was asked if Foles was playing Sunday against the Redskins.

The answer was obvious:

Foles completed 35 of his 49 passes for a franchise-record 471 yards, four touchdowns and an interception in the victory.

On the year, Foles has thrown for 1,192 yards, five touchdowns, and three picks while completing 69.8 percent of his passes and registering a passer rating of 93.4 in four starts.

Just like last year, the 30-year-old is starting in relief of Carson Wentz, although unlike last season when Wentz was knocked out with a torn ACL late in the year, this time, a back injury forced him out.

Foles, who played his collegiate football at the University of Arizona, was originally selected by the Eagles in the third round (88th pick overall) of the 2012 NFL Draft.

He started six games during his rookie campaign, throwing for 1,699 yards, six touchdowns, and five picks.

The following year, Foles made the Pro Bowl after finishing with 2,891 yards, 27 touchdowns, and just two interceptions.

He spent the first three years of his career in Philly before landing with the St. Louis Rams in 2015, where he made 11 unproductive starts. Foles then made his way to the Kansas City Chiefs for one season in 2016 before returning to Philly last year, when he shockingly led the Eagles to their first-ever Super Bowl title.

Philadelphia currently owns a record of 8-7 and can make the playoffs with a win coupled with a Minnesota Vikings loss to the Chicago Bears.