EAGLES’ FOLES HAS HIGHER PASSER RATING THAN NO. 1 PICK LUCK

Why is Andrew Luck considered to be the marquee quarterback in tonight’s Eagles game, and why doesn’t Nick Foles have that role?

If you are judging by the numbers, that is exactly the kind of role reversal that is merited.

Luck is widely considered one of the NFL’s best quarterbacks, but a deeper look reveals he hasn’t really lived up to the hype as the No. 1 overall pick in the 2012 draft.

In fact, Luck might not even be the best quarterback from his draft class on the field tonight when the Indianapolis Colts (0-1) host the Eagles (1-0).

Among quarterbacks in NFL history, only Russell Wilson (the 75th overall draft pick in 2012, with a 100.9 career passer rating) has more regular-season wins than Luck through their second season, according to Pro-Football-Reference. Playing in the weak AFC South however, has inflated Luck’s 23-13 career record, including the postseason. Against non-division teams, Luck is 13-11. 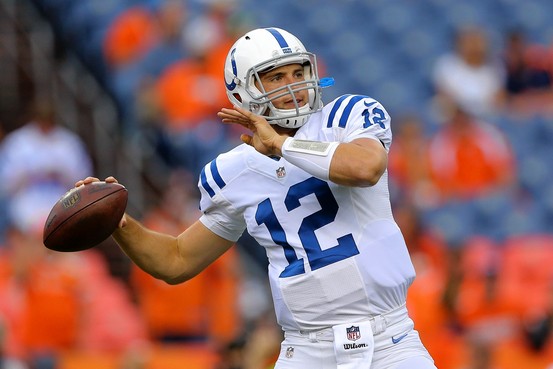 In Luck’s defense, he’s had to carry a huge share of his team’s offensive output. His 651 career rushing yards are nearly 20% of the Colts’ total and he’s scored 10 of the 27 rushing touchdowns Indianapolis has had over this span. Luck also has shined in the clutch, with a 16-3 record in one-score games. That is potentially good news for the Colts against the Eagles, as oddsmakers have Indianapolis favored by only a field goal.