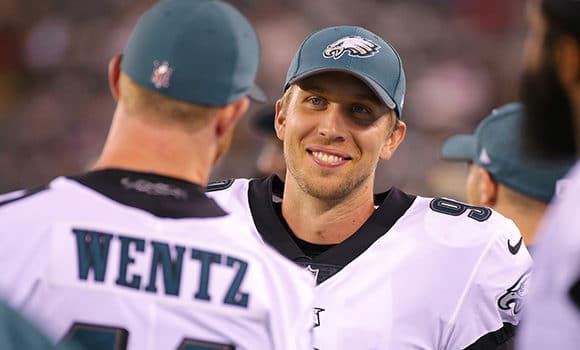 So, the Eagles made official yesterday what had leaked Saturday, much to the chagrin of coach Doug Pederson:

Nick Foles will be the starting quarterback Thursday night in the opener against the Falcons at the Linc.

It makes no sense to rush Carson Wentz back too soon from his rehab after tearing his left knee’s ACL and LCL last Dec. 10.

After all, Foles did pretty well in the Super Bowl, winning the MVP after he led the Eagles to a 41-33 win over the Pats in Super 52.

“After consideration and everything and about the football team and this decision, Nick Foles is the starter Week 1,” he said. “My press conference will be tomorrow, and I’ll answer questions at that time. But I wanted you to hear it from me. It is about the football team and the best interests of the 53. And Nick Foles will be my starter Week 1. Thank you.”

Just one day earlier, Pederson went after the media for reporting that Foles, and not Wentz, was expected to start, saying words were put in his mouth and that he was holding back naming a starter for a competitive advantage.

Falcons coach Dan Quinn downplayed the importance of knowing for certain who the quarterback would be:

“If style was so drastically different … probably back in the day and we were having this conversation between Jaws [Ron Jaworski] and Randall [Cunningham], we might have that discussion,” he said. “But these two guys are really equipped to run it in a similar fashion.”

Wentz, the No. 2 pick out of North Dakota State in 2016, has looked increasingly like his old self in recent weeks. His mobility is returning, and his throwing velocity is up compared to last year. Teammates have been raving about how he has looked on the practice field. He had been splitting first-team reps with Foles, but will move back into a supporting role for at least this week.

Foles was red-hot during the postseason and accounted for four touchdowns against the New England Patriots in Super Bowl LII en route to MVP honors. He is coming off a rocky preseason, going 16-of-26 for 171 yards with no touchdowns, two interceptions and a pair of lost fumbles and was sacked six times.

“We obviously love the fact that Nick Foles is here, and he’s been our starting quarterback since Carson went down with the injury,” said Eagles offensive coordinator Mike Groh. “We’ve had a lot of success with Nick, and so we have a lot of confidence and faith in Nick and the way he is going to play and how the guys are going to play with him.”