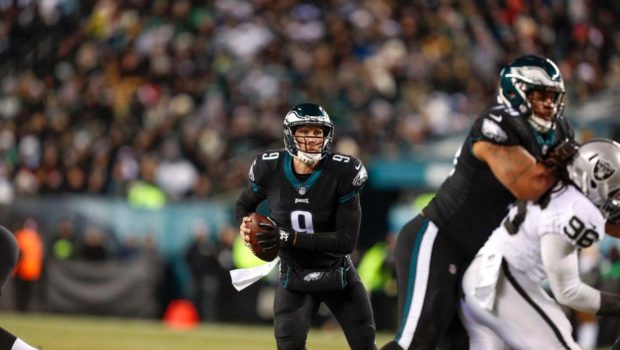 Eagles’ quarterback Nick Foles reverted last night to the form that we had all feared:

He’s a back-up, and his performance will tick up and down from game to game, but he’s essentially a back-up!

He completed 19-of-38 passes for 163 yards, one touchdown and one interception. Foles often held the ball too long, missed receivers high or in the dirt, and rarely hit targets in stride. The veteran backup was particularly woeful on third downs, where the Eagles went 1-14.

“I didn’t play good enough. I have to play cleaner and, obviously, play better,” Foles said after the win. “Third down is a big thing with a quarterback; pin-point accuracy, making good decisions. I’ll look at the film, I’ll improve. These wins are tough; wins in the NFL are tough. This was a crazy, sloppy game. I thought our defense played wonderful — giving us an opportunity — I believe it was five turnovers. That’s huge, that was big.”

Foles’ four-touchdown performance in Week 15 belied the struggles the Eagles offense will encounter without Carson Wentz. Gone are the explosive plays and third-down magic. When the run game is stymied, as it was in the second half Monday night, the Eagleswill struggle to move the ball.

“We found a way to win. That’s the bottom line,” he said. “We found a way to win. I’d love to win 40-3 or 34-28, but sometimes you’re going to be in these games. We got to be hard on ourselves as coaches and players looking at this film, moving forward, and get things fixed offensively. I thought the defense played really, really well. They kept us in the football game, special teams. [It was a] team effort, though. [We] found a way. [We are] sitting here today 13-2. Everybody’s got to come through here now. That’s the exciting part.”