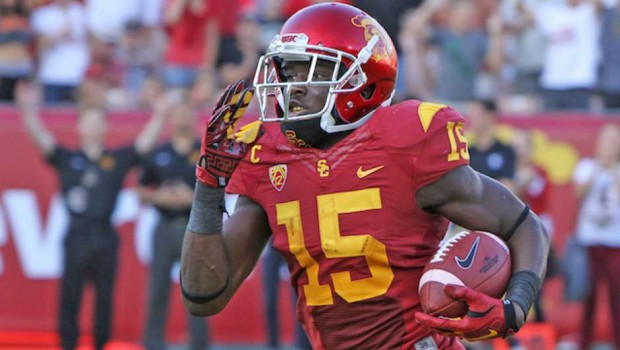 The NFL draft is 26 days away — April 30 in Chicago — and no one knows which way the Eagles are leaning.

Will they take a cornerback, a wide receiver, a quarterback from Oregon?

But if 2014 is any guide, it wouldn’t be surprising if the Birds went for USC wideout Nelson Agholor.

Draft experts rate him to be the fourth or fifth best wide receiver in the draft class, right up there with the likes of Alabama’s Amari Cooper and West Virginia’s Kevin White.

The Eagles seem to fall into the camp of scouts that are high on the 6-feet, 198-pound Agholor, as they have both had him to Philly for a visit, and head coach Chip Kelly flew down to Tampa Bay to work him out.

Kelly getting some one-on-one time with a prospect is nothing to look over. Last year, after Kelly met Jordan Matthews at Vanderbilt, the head coach worked him out privately as well, getting to know the receiver that would soon become the Eagles’ second-round pick.

Since the Eagles took Matthews, it has been reported that Kelly wanted Matthews in the first round, and the team trading up in the second round to make sure they landed him seems to back that up.

The attention Kelly showed Matthews turned into the receiver ending up in Philly, and the same very well could happen to Agholor.

Agholor finished last season with 104 catches, 1,313 yards and 12 touchdowns. Like Matthews, Agholor ran all kinds of different routes at USC, both on the outside and from the slot. He does not have the blazing speed that a prospect like Phillip Dorsett out of Miami does, but his 40-yard dash time was an impressive 4.42 seconds.

HOWIE TRASHES WENTZ, WHO MELTED DOWN WHEN HURTS WAS DRAFTED!