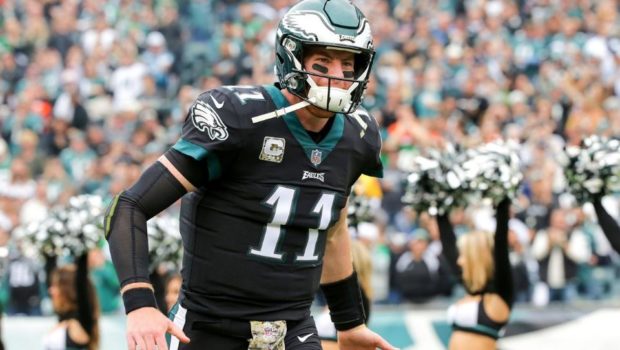 The Eagles have hit the bye at 8-1, the best record in the NFL, with a crushing beatdown of the Denver Broncos 51-23.

Wide receiver Alshon Jeffery caught two TD passes and rookie running back Corey Clement scored twice for the Eagles who extended their win streak to seven games, longest since the 2004 Super Bowl season. It was the Eagles’ most points since they beat the Bears, 54-11, in 2013 at the Linc.

Wentz completed 15 of 27 attempts for 199 yards and a 118.7 passer rating for the Eagles, who wore their all-black uniforms for the first time this season and played without injured tight end Zach Ertz.

Wentz has thrown 17 of his NFL-leading 23 TD passes in the last five games. The single-season franchise record of 32 scoring passes was set by Sonny Jurgensen in a 14-game season in 1961.

Tight ends Brent Celek and Trey Burton combined for five receptions worth 80 yards and one score, a 27-yard grab by Burton.

Jeffery had six receptions for 84 yards while Clement rushed for 51 yards on 12 carries. LeGarrette Blount had nine rushes for 37 yards.

The Eagles trailed by a field goal in the first quarter but were ahead, 31-9 at the intermission.

The Broncos (3-5) lost their fourth straight game. The switch to Brock Osweiler as starting quarterback didn’t go well as he was intercepted by Patrick Robinson and Rodney McLeod.

It was the first time the Broncos surrendered 50 or more points since the 2010 season, when they were beaten 59-14 by the Raiders.

Twenty different Eagles had at least one tackle for the Eagles.