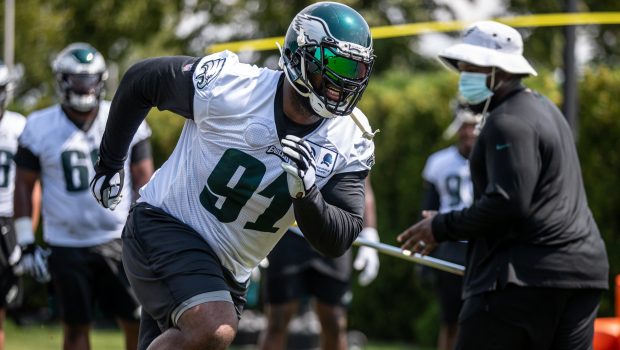 Eagle wide receiver Alshon Jeffery took part in individual drills during the portion that was open to reporters on yesterday, the first time he has practice since suffering a season-ending foot injury on December 1, 2019 in Miami.

The Eagles host the Bengals Sunday at the Linc:

The 6-3, 218-pound Jeffery led the Eagles’ wide receivers in receptions (43), receiving yards (490), and receiving touchdowns (4) last season despite only playing in 10 games. In fact, Jeffery was injured in his best performance of the season, a nine-catch, 137-yard outing against the Dolphins.

A Pro Bowl selection in 2014, Jeffery was instrumental to the Eagles’ Super Bowl win in 2017. Playing the entire season with a shoulder injury, Jeffery led the wide receivers with 789 yards and nine touchdowns. He set the single-season franchise playoff records with 219 yards and three touchdowns on the way to the title.

Jealon Reagor suffered a torn ligament in his thumb Sunday against the Rams. The Eagles currently have four healthy wide receivers and could use Jeffery’s size and experience in the lineup.

Following practice, Jeffery was officially listed as a limited participant with the foot injury.

Defensive tackle Fletcher Cox (above) missed practice for a second day in a row with an abdomen injury. Safety Rudy Ford (groin) and wide receiver Jalen Reagor (thumb) did not practice and neither will play Sunday against the Bengals.