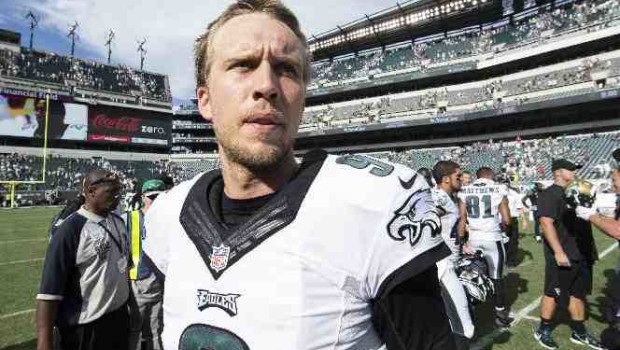 EAGLES’ FIRST HALF SUCKED, AND KELLY PLACES THE BLAME

One of the many ways Eagles coach Chip Kelly has delineated the difference with his predecessor, Andy Reid, is candor.

But after yesterday’s 34-17 comeback win over the Jags, Kelly was clear as to who was to blame for his offense getting off to such a dreadful start.

Although he didn’t use his name, and did admit other factors played in, he was obviously talking about QB Nick Foles (looking relieved after the game in photo above), who turned the ball over three times and missed wide open receivers throughout the first half, and entered the locker room with a passer rating of 50.5. The performance was one of the worst of Foles’ tenure with the Eagles, and it kept the offense off the scoreboard.

“We felt like when you looked at it, you get to look at pictures on the sideline,” Kelly said, “and there were plays to be made there.”

Foles was so bad that some thought Kelly might bench him, but when asked after the game, the head coach said that wasn’t considered.

“We weren’t throwing chairs or anything during halftime,” Kelly said of his talk with Foles. “It was just, hey, settle down. This is what they’re giving us. They did exactly what we practiced, exactly what we trained for. They played a lot more zone than man. But we trained against it. It was just a matter of executing it. We didn’t execute well in the first half, but fortunately for us we did in the second half.”

Sticking with Foles through the first half did pay off for Kelly, as his quarterback bounced back to throw two touchdowns and lead the team back for the win.

After the game, Foles said that having his coach stick by him and allowing him to work through his struggles will pay off down the road.