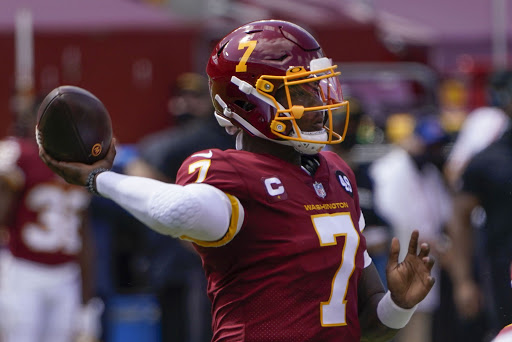 The Eagles end the season next Sunday night at the Linc against the WFT.

Haskins release wasn’t a surprise, but it nonetheless has put the 23-year-old through the ringer, he revealed in an emotional interview with WUSA 9 DC.

“It was just a lot of emotions,” Haskins told the television station when asked about his reaction to being waived. “Really just disappointed and sad. Thankful for the opportunity Washington has given me.”

Haskins described his gratitude for the chance the organization gave him to be a NFL quarterback and return to his home area.

“It’s been a long week,” the quarterback added. “Hardest week, worst week of my life. All good things come to an end eventually.”

Haskins said he wants to learn from mistakes and earn another NFL opportunity, and hopes a change of scenery will help. Asked what he learned from his decisions, Haskins said: “I have no doubt I can overcome this, that I can grow, that I can be a better person, better athlete, better quarterback, better leader because of this.”

Despite an unfortunate first two professional seasons, Haskins’ love for the game hasn’t diminished, he said. The Ohio State Buckeyes product still finds joy in winning, throwing touchdown passes and the “brotherhood atmosphere,” he said. He also apologized for letting his teammates down.