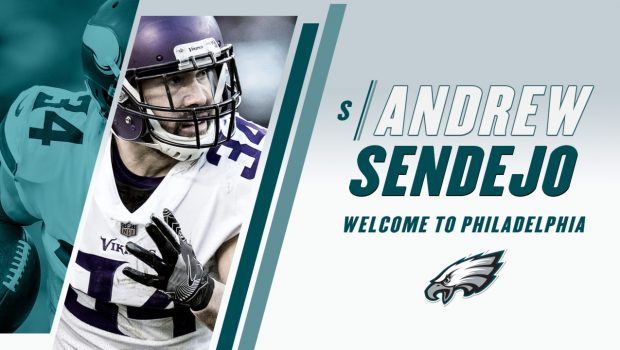 The Eagles are shoring up their porous secondary, signing Andrew Sendejo to a one-year contract.

A nine-year NFL veteran, Sendejo has played in 99 career games (including playoffs) and has totaled 432 tackles, seven interceptions and 31 passes defensed.

Sendejo entered the NFL with the Dallas Cowboys in 2010 and joined the Minnesota Vikings in 2011. He went on to play eight seasons in Minnesota and had a breakout season in 2013. That year, Sendejo started 10 games at safety and set a career high in tackles (104), while also adding 13 tackles on special teams.

After being named the Vikings Special Teams Player of the Year in 2014, Sendejo earned a full-time starting role in 2015, opening 13 games at safety and registering 100 tackles, one interception and six passes defensed. Dating back to 2015, Sendejo has started every game in which he has played and has recorded 308 tackles, six interceptions, 26 passes defensed and three fumble recoveries.

Sendejo will provide veteran depth at safety for the Eagles, who have Malcolm Jenkins and Rodney McLeod locked in as starters. The Eagles typically prefer to play five defensive backs on the field, specifically when they move Jenkins down in the box as a linebacker. Sendejo can play up top with McLeod or play the Jenkins role at linebacker, giving the Eagles an extra option at defensive back to use in nickel and dime packages.

Senjejo was one of the best coverage safeties in the NFL in 2017 as opposing quarterbacks had just a 59.8 passer rating when targeting him. He allowed 17 catches for 257 yards and had three interceptions on 29 targets. The season prior, opposing quarterbacks had a 79.6 passer rating when targeting Sendejo, who allowed 12 catches for 214 yards on 19 targets. Sendejo had two interceptions that season.

Sendejo is the latest addition to an Eagles defense that has made improvements against the run and pass. Philly added L.J. Fort last week, as he was the linebacker the Pittsburgh Steelers asked to play inside on coverage snaps and really became their only linebacker to play regularly. The Steelers trusted Fort in base formations and kept him inside in dime packages, showing his versatility against the run and ability to drop back in coverage.