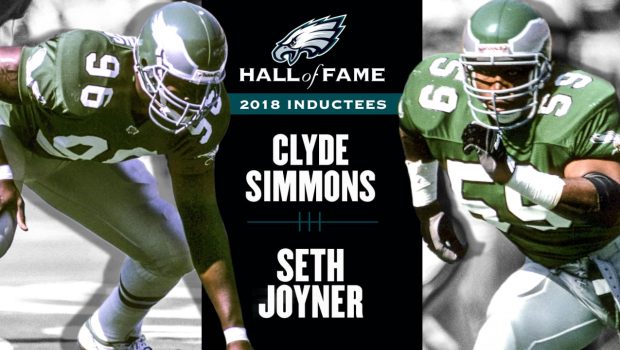 It’s hard to believe it has taken the Eagles this long to recognize two of their greatest defensive players.

But on Sept. 23 Seth Joyner and Clyde Simmons will be inducted into the Eagles Hall of Fame when the team hosts the Indianapolis Colts at Lincoln Financial Field.

Chairman and CEO Jeffrey Lurie made the announcement at halftime during tonight’s preseason game against the Pittsburgh Steelers:

“Seth Joyner was one of the most talented and fearless outside linebackers of his era, and the way he committed his heart and soul on every play spoke volumes about his love for the game,” said Lurie. “Seth epitomized the complete defensive player – dominant against the run, extremely skilled in coverage, and relentless in how he blitzed. Seth is one of the all-time greats in our franchise’s history and he set a powerful example for the generations of players that followed him at his position.”

A native of Spring Valley, New York, Joyner was originally selected by the Eagles in the eighth round (208th overall) of the 1986 NFL Draft, following a standout career at Texas-El Paso. In 120 career games with the Eagles, he produced 875 tackles, 37.0 sacks, 17 interceptions, 21 forced fumbles, eight fumble recoveries, and five defensive touchdowns.

“Clyde Simmons was one of the most feared pass rushers ever to play in Philadelphia, but he was also ferocious against the run and made his presence felt each and every week in the trenches,” said Lurie. “He was a pillar on one of the best defenses in NFL history and an integral part of the team’s success for many years. Clyde’s explosive and aggressive style of play resonated with our fans and also allowed him to become a dominant defensive lineman over the course of his career.”

Simmons and Joyner were key contributors on an Eagles defense in 1991 that finished the season ranked first in the league in fewest passing yards allowed, fewest rushing yards allowed, and fewest total yards allowed, becoming just the fifth team in NFL history to accomplish that feat and the first since 1975.