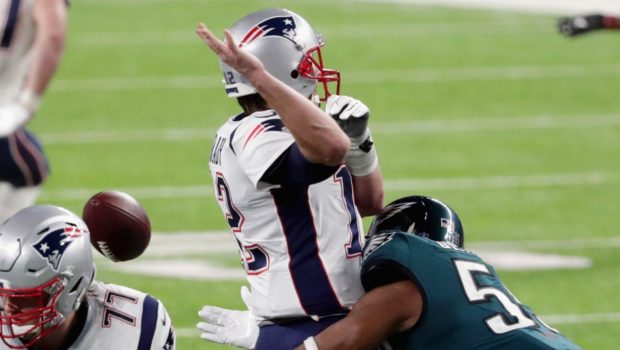 Call it a sack.

Call it a strip.

Call it whatever you want.

But when Brandon Graham finally got to Tom Brady, with the game on the line in the amazing Eagles Super Bowl win over the Pats, Eagles fans held their breath.

And then screamed for joy!

So when Brady returned to the field, down by 5 with 2:21 left, the script seemed all but written.

Somehow, Brady would drive the Patriots down the field, likely in some absurd, borderline illegal fashion, and everybody outside of New England would once again spend the next year cursing the football gods.

But this time the Eagles stood across from perhaps the most dominant quarterback in NFL history—and emerged with a 41-33 victory to earn the first title in franchise history.

“We knew we were going up against the best,” defensive end Graham said. “How much sweeter it is that we beat the best today.”

After the Eagles failed to record a sack for the entire contest, Graham exploded across New England’s offensive line and whacked Brady’s arm as he threw, forcing a fumble. Derek Barnett recovered, setting up a field goal that made it 41-33 Eagles.

Click to watch the strip sack heard ’round the world

Still, that left 1:05 on the clock for Brady, enough time for him—and maybe only him—to stage a miracle. Instead, as they did for much of the evening, the Eagles’ defense buckled but didn’t break, escaping when Brady’s last-play Hail Mary fell to the turf at U.S. Bank Stadium after nearly landing in Rob Gronkowski’s outstretched hands.

Eagles defensive end Chris Long said it felt as if the final throw hung in the air “for eight seconds,” and he thought “for a split-second” that New England came down with the ball.

“Nobody panicked,” defensive tackle Fletcher Cox said. “During the whole game, nobody panicked. We knew what we had to do to stop him. We knew that it would come back to a couple plays.”

For most of the night, the Eagles didn’t appear capable of keeping Brady in check. He threw for 505 yards, a Super Bowl record. The Patriots didn’t punt once in the entire game, the first team ever to do that in the Super Bowl. Malcolm Jenkins, a Pro Bowl safety, said that up until that point, “There just were so many lapses that we had.” That allowed Brady to carve them up.

Brady mostly mitigated the Eagles’ vaunted defensive line—the top pass-rushing unit in the NFL—by releasing the ball quickly, not letting the Birds pressure the quarterback. Some Eagles admitted that Brady’s rapid-fire strategy frustrated them at times, leaving them unable to utilize perhaps their best weapon. All along, however, Graham said they knew that eventually, Brady would hold the ball just a little too long. So they resolved to “keep coming, keep coming.”

It ultimately paid off with the fumble that turned the momentum once and for all.

“Strip sacks happen, and they made a play there,” Gronkowski said. “We didn’t.”

Even after the turnover and the eventual field goal, veteran Eagles tried to maintain their teammates’ composure. The Patriots, much like zombies, don’t die until their opponent separates their head from their body and burns it in the fiery pits of hell. Jenkins in particular “attempted to talk everybody down,” recognizing that the the Eagles would need a second defensive stand to survive.

“There was no doubt we were getting that stop,” Jenkins said. “We realized that somebody at the end of this drive was going to be a hero. Just be ready when your time comes.”