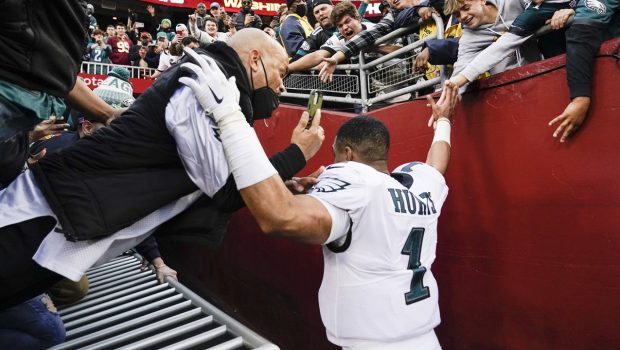 Four Eagles fans from New Jersey are suing the Washington Commanders, alleging they are still coping with injuries sustained in January when a railing broke at FedEx Field and several spectators fell.

The fans who filed the lawsuit Friday are each seeking upwards of $75,000 for damages they say they suffered at the game and the issues they say they’ve dealt with since.

The collapse occurred after a game between Washington’s football team and the Eagles on Jan. 2, 2022.

Video shows several fans leaning over a railing as members of the Eagles, including quarterback Jalen Hurts, walk toward the team’s exit tunnel. Just as Hurts began to high-five fans, the railing collapsed. Several fans ended up on the ground, the video shows.

Hurts was seen helping some of the fans. He later wrote a letter to the NFL and Washington inquiring about “what follow-up action is being considered in response to the near-tragic incident.”

In court documents, the fans say the defendants treated them in a callous and indifferent manner.

The four fans sued for gross negligence and allege the team and others should have known that fans would gather in the area of the railing, which they say should have been sturdy.

The fans fell 5 to 10 feet onto concrete and onto each other, the suit says. At least two people got “entangled with the railing itself, which caused their bodies to twist and torque from the stress of the falling railing interconnected with their limbs,” it says.

The railings were anchored by “merely placing a railing ‘leg’ into a ‘hole’ below, such that the railings could literally be lifted out from the rail holding below,” the suit says. One section of railing was secured with thin, plastic zip ties, it says.

After the collapse, the team issued a statement saying the fans were offered an onsite medical evaluation and left of their own accord.

The fans’ lawsuit says that neither the team staff nor CSC security workers tried to assess their injuries.

The fans say they are still receiving medical attention for the injuries they sustained at the game. They are seeking compensation for loss of income, medical expenses and legal fees.