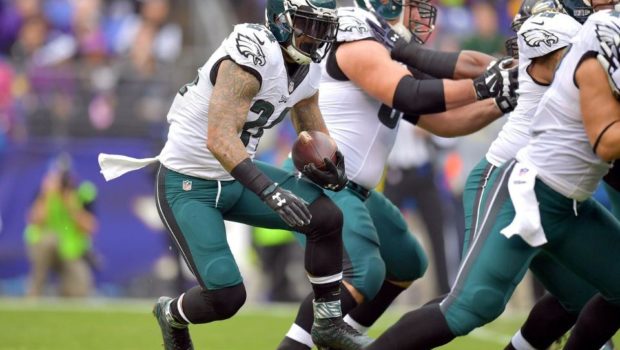 EAGLES FANS SHOULD BE PROUD OF VALIANT EFFORT AGAINST RAVENS

The Eagles battled the Baltimore Ravens valiantly Sunday at M&T Bank Stadium before losing 27-26 on a failed 2-point conversion attempt with seconds remaining.

It doesn’t tarnish RB Ryan Mathews’ (above) herculean effort of 128 of the toughest yards gained of the season, and the overall grit the Eagles displayed in a game that was played for pride, and nothing more.

Their chances of making the NFL playoffs were tissue paper thin before the start of the game, and with the loss they were eliminated from contention.

But since the Cleveland Browns hold the Birds No. 1 draft pick next year, it’s academic what their record is. The main goal was to have QB Carson Wentz survive the game unscathed, and he did with useful on field experience, even in a losing effort.

With the Ravens up 10 on the Eagles’ 11 yard line, Joe Flacco inexplicably decided to pass the ball, and it was intercepted by Eagles LB Jordan Hicks that started the Eagles comeback.

Ravens head coach John Harbaugh called it “the all-time worst play call ever”. The Eagles nearly made them pay the price, but came up short at the end.

Right Tackle Lane Johnson’s 10-game suspension was completed after the Ravens game, he is expected to return for the Eagles Thursday night battle with the New York Giants on December 22nd at the Linc, 8:25pm/NBC/NFLN/Twitter