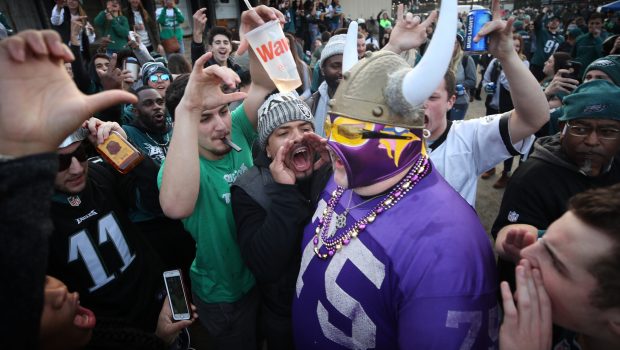 EAGLES FANS WERE MEANIES TO US, LAME-ASS VIKES FANS SAY!

Eric Johnson’s experience at January’s NFC Championship game in Philly was not as horrible as it was for some Minnesota Vikings fans. But it wasn’t exactly a walk in the park, either, and that led the West Fargo resident to complain to the National Football League.

It appears his voice is being heard, along with the voices of many other Vikings fans.

The NFL has spent the past several weeks investigating ugly behavior exhibited by some Eagles fans at the Jan. 21 game and, according to an email sent by the league’s chief security officer, “will publicly announce changes that will be implemented going forward.”

According to a Facebook post made by a member of a Vikings fan group, NFL senior vice president and chief security officer Cathy Lanier wrote, “We believe the interviews will help inform some recommendations going forward. … We want to incorporate any lessons learned into future improvements.”

An email sent to Lanier asking for comment was returned by a league spokesman.

“We have been speaking to some fans who attended the game to learn more about their experience,” the NFL’s Brian McCarthy said in an email. He did not reply to an email asking for more details: