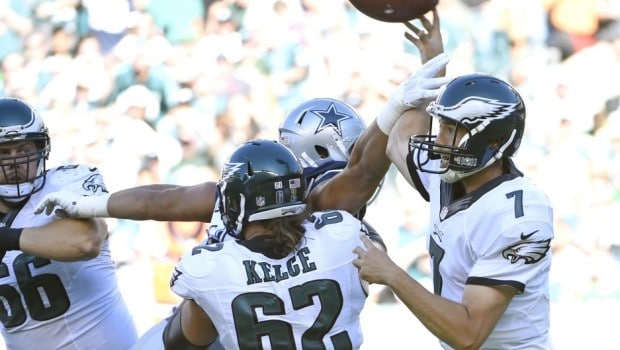 The 800-pound gorilla in the room — the subject that no one wants to seriously discuss — is why the Eagles’ guard play has been so awful during their first two games.

Eagles Supreme Leader Chip Kelly shit-canned vets Todd Herremans and Evan Mathis for various reasons, and we can debate the efficacy of that another day.

But their replacements, Alan Barbre and Andrew Gardner, should be sued by DeMarco Murray for running back abuse!

QB Sam Bradford hasn’t had a clean pocket on every snap, but he has only been sacked once in two games, a very respectable number.

The issue has been run blocking, specifically poor play from offensive guards. Opposing defensive lines are in the backfield far too quickly on run plays, giving the running backs close to no chance of making a play.

The bad news is the Eagles don’t have any depth on the offensive line, so they are going to have to hope the duo of Barbre and Gardner can improve — quickly.

Where that waiver wire?

Can John Moffitt be any worse?