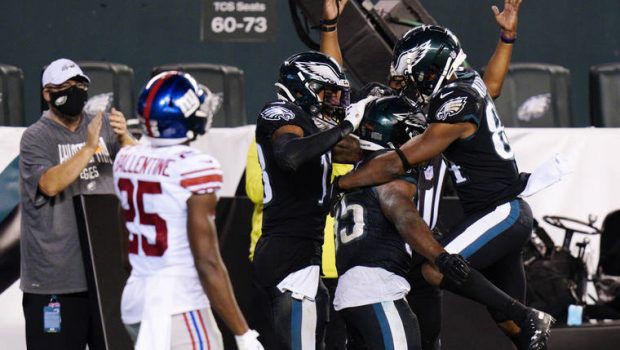 “I was pretty surprised we pulled it off. When I threw it, I thought it was a little high, but he plays bigger than he is,” Carson Wentz said of Scott, who is 5-6. “Obviously, there are a lot of emotions there. It was kind of a big, exciting moment but a big kind of a sigh of relief because we know we left a lot of plays out there. But the way we battled and found a way at the end of the game was huge for us.”

Carson Wentz finished 25-of-43 for 359 yards with three touchdowns (two passing, one rushing) and an interception.

Wentz has had a sometimes-bumpy start to the season — his 10 interceptions through seven games are the most by an Eagles quarterback since Sam Bradford in 2015 — but he has picked up the pace over the past three games and continues to show a penchant for late-game success.

“It just shows that he is taking that step in the right direction to be one of the top quarterbacks in this league,” coach Doug Pederson said.

“This is what it takes, especially with the situation that we are in healthwise as a team. We know these games are probably going to be closer than we would like, but it is good to see your quarterback stand in there, go toe-to-toe, take some shots and still lead your team down the field for the win.”

The contest was reminiscent of the Eagles’ Week 14 triumph over the Giants last season, when they overcame a 17-3 deficit to prevail 23-17 in overtime. That kick-started a four-game winning streak that put the Eagles in the playoffs.

The Eagles could be on a similar trajectory this season despite their 2-4-1 record. According to the ESPN Football Power Index, their chances of winning the division shot up to 61% with Thursday’s victory.

The Eagles’ defense generated three turnovers, including a Brandon Graham strip sack of Giants quarterback Daniel Jones late in the game to seal the win.