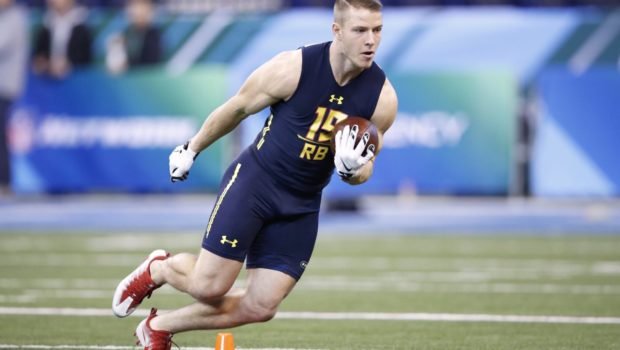 A) The perfect next-generation NFL star, descended from football royalty and teeming with the versatility, speed and star power the game craves right now, or;

B) A “me-first” millennial athlete with Popeye biceps who, at just 5-foot-11 and 200 pounds, may be a little too big for his britches as he charts his path to NFL stardom.

The lack of consensus about the Stanford hybrid McCaffrey is reflected in draft projections that either have him going in the top 10 of falling to the late teens or further.

Amplifying McCaffrey’s lightning-rod status is his bold—or ill-advised—approach to boosting his draft status.

McCaffrey skipped Stanford’s Sun Bowl appearance rather than risk injury. He wowed scouts with his speed and agility at the NFL combine but turned down individual workouts with NFL teams. He will spend draft night at home with his family in Colorado rather than waiting in a green room in Philly this Thursday night. Some 264,000 fans follow him on Instagram at “run_cmc.”

McCaffrey’s off-field profile also attracts attention—and can fuel either side of the debate about him.

He plays piano, swears he will return to Stanford during off-seasons to finish his degree, and has relished opportunities to hang around Silicon Valley luminaries like Mark Zuckerberg and Elon Musk. He has the requisite Nike deal, but his marketing agent, Ira Stahlberger of IMG, recently spent a day at the Silicon Valley venture-capital firm Andreessen Horowitz getting pitched by start-up CEOs interested in partnering with McCaffrey.

It all makes for a lot of noise and expectations, that seem impossible to fulfill to which McCaffrey has responded in his own way.

In an interview at Stanford last month, he said he knew “it was a lose-lose situation” to skip the bowl game. But after winning support from teammates and some “tough talks” with Stanford head coach David Shaw, he decided not to risk his future on a meaningless game. “The easy decision would have been to play,” he said.

When criticism over his decision not to meet with individual teams crested this month, McCaffrey responded with an eye-catching video showing him adroitly hopping back and forth over metal bars during a footwork drill.

He similarly plans to let his ability talk when he enters an NFL locker room.

“I liken it to when I was a freshman,” McCaffrey said. “I told myself to shut up, don’t say anything and work my butt off.”

The allure of a player like McCaffrey comes as the league is desperately searching for bright lights to take the torch from retired, imperfect or aging stars like Peyton Manning, Calvin Johnson and Tom Brady. NFL ratings plummeted for much of last season amid concerns about safety, a saturated television schedule, controversy over players kneeling during the national anthem and a distracting U.S. presidential election.

“We are in a lull here where we have some talented guys but they haven’t been able to take their teams to the next level and win,” said the veteran sports marketing agent Steve Rosner of New Jersey-based 16W Marketing.

McCaffrey and his family appear sent from central casting for rescue duty. His father Ed was a Pro Bowl wide receiver for the Denver Broncos; older brother Max is part of the Green Bay Packers organization; and younger brothers Luke and Dylan, who are still in high school, are top Michigan recruits.

Fittingly, McCaffrey pitches himself as a football obsessive. “I honestly have no idea what I would do without it,” McCaffrey said after working out for scouts at Stanford last month. “I think about it almost every second.”

The pro day workout at Stanford included a twisting, leaping catch of an errant throw on a sideline route, as well as a dropped ball during a kickoff drill. McCaffrey seemed more bothered than anyone else.

Watching from the sidelines, McCaffrey’s mother Lisa, who played soccer for Stanford a quarter-century ago, recalled how Christian cried his eyes out after his high school team in suburban Denver lost in consecutive seasons to a local rival. Fearing he was taking losses too hard, she told him there was no crying in football

She has spent years fighting a losing battle to get her sons and husband to talk about something besides football. But the intense family football focus paid dividends. Steve Palazzolo, an analyst with Pro Football Focus, an analytics company that multiple NFL teams use, said McCaffrey should have won the Heisman trophy in 2015, when he broke Barry Sanders’ record for all-purpose yards, which stood for 27 years.

Then in 2016, after Stanford lost three starters on its offensive line, McCaffrey averaged one more yard after catching the ball than he had the previous year.

“I thought that was a telling stat,” Palazzolo said. “We saw so many times how he ran routes out of the backfield and made guys miss in space.”

Another telling stat—McCaffrey created 5.86 yards per play last season when opponents lined up at least eight players in the central part of the defense, referred to as “the box.” That’s more than Leonard Fournette, the LSU running back rated higher than McCaffrey.

McCaffrey argues that in the scheme-happy NFL of 2017, it’s essential to have running backs that can get outside. “The whole point of today’s league is to create mismatches and get your athletes into space,” he said.

Johnson Bademosi, the Detroit Lions cornerback, said he was first awed by McCaffrey three springs ago, when McCaffrey showed up before college for conditioning workouts that Bademosi and other Stanford alums participate in. Bademosi, coming off his second NFL season, said McCaffrey looked about 15 years old at the time and crushed him in the endless shuttles and sprints.

“Whatever he does, it’s going to translate,” Bademosi said. “ Someone is going to figure out what to do with him.”