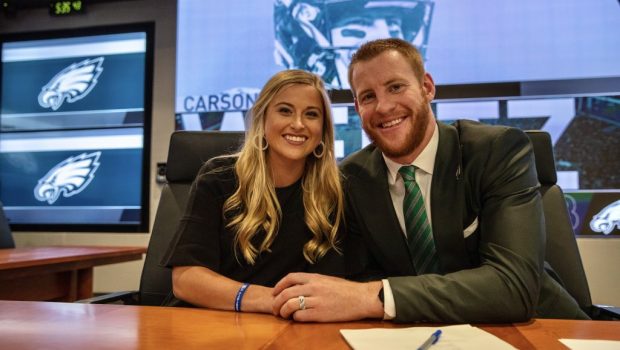 EAGLES FAMILY MAN WENTZ COMMITS TO PHILLY WITH NO REGRETS!

“It’s something both sides wanted to get done. I knew I wanted this to be home for a long time, and ever since being drafted, it’s felt like home,” Carson Wentz said at yesterday’s presser. “So as soon as we found something that was a win-win, a really fair opportunity, I jumped at it, just because I love this place and I want to be here.”

The four-year extension to QB Carson Wentz’s contract lasts through the 2024 season and includes $107.9 million guaranteed, including $66 million due at signing, a source told ESPN’s Adam Schefter.

And while the going market value for a starting quarterback is likely to rise between now and 2024, Wentz said his level of comfort in Philly eased any concerns about signing a long-term deal.

Wentz said he could see himself living in Philly for a decade or more after his first meeting with the team ahead of the 2016 draft, when the Eagles moved up to select him with the second overall pick.

Eagles owner Jeffrey Lurie said Wentz had been “incredibly impressive” since before the draft.

“Every moment he’s been with us in the Eagles, he’s just reinforced everything we expected and much more from those (pre-draft) days, whether it’s leadership, poise, the desire to be really, really good, if not great,” Lurie said. “Attention to detail, smart, the face of the franchise in so many ways … it’s how you draw it up. Our goals are to win really big, and to do that at its best, you need a quarterback that wants it really badly, and Carson, in every way, wants it badly.”

Wentz was injured when Nick Foles led the Eagles to their first Super Bowl win in the 2017 season, and he said neither he nor Philadelphia is satisfied with the single championship.

“I don’t think this city, this culture could fit me any better, just with the passion (the fans) bring and how bad they want to win, and I’m wired the same way,” Wentz said.