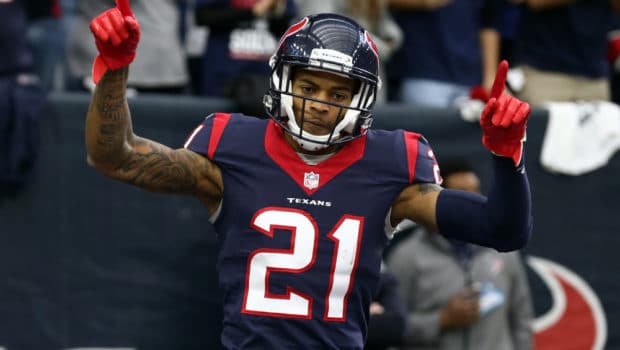 EAGLES FACING JAGS, WHO HAVE 3 CORNERBACKS OUT!

Eagles quarterback Carson Wentz’s eyes must be lighting up:

The Jacksonville Jaguars will be without Pro Bowl cornerback A.J. Bouye (above) against the Birds in London tomorrow.

The Jaguars (3-4) ruled Bouye out, saying he did not make the overseas trip. The team also will be without backup cornerback Tyler Patmon because of a neck injury. Patmon also remained in Jacksonville.

Cornerback D.J. Hayden (toe) made the flight, but he’s unlikely to play because of a lingering toe injury. Hayden has missed five consecutive games and hasn’t practiced since Sept. 21.

Bouye missed practice Thursday after sustaining a calf injury in drills the day before.

Without them, the Jaguars will have three undrafted rookie cornerbacks to play alongside All-Pro Jalen Ramsey.

Tre’ Herndon or fellow undrafted rookie Quenton Meeks is expected to start, and newly signed Dee Delaney will serve as a backup. Meeks started the season on the practice squad, and Delaney was promoted to the 53-man roster Thursday. The team placed linebacker Donald Payne (knee) on IR.