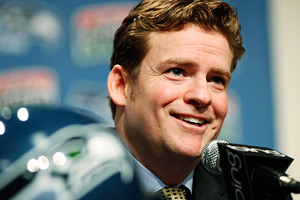 And he is reporting that the Eagles are expected to interview Seattle Seahawks director of college scouting Scott Fitterer for their open general manager job.

Fitterer, who is expected to interview this week, is viewed as one of the scouts in the Seahawks organization that targeted safety Earl Thomas — whom the Eagles passed on to take Brandon Graham! — in the first round back in 2010.

Here is some more information on Fitterer, via the Seahawks official website.

He was promoted to director of college scouting in 2010. In his current role, Fitterer has been involved in the NFL Drafts that have reshaped the Seahawks’ roster — beginning with the selections of All-Pro free safety Earl Thomas, Pro Bowl left tackle Russell Okung, split end Golden Tate and strong safety Kam Chancellor in 2010; All-Pro cornerback Richard Sherman and linebackers K.J. Wright and Malcolm Smith in 2011; and quarterback Russell Wilson, middle linebacker Bobby Wagner, defensive end Bruce Irvin and guard J.R. Sweezy in 2012.

Just how much power the team’s new general manager is going to have is not yet known, as it was made clear when Howie Roseman was stripped of power that head coach Chip Kelly was going to be running the personnel department.

That leaves any new hire as Kelly’s right hand man, presumably without final say over any roster decisions