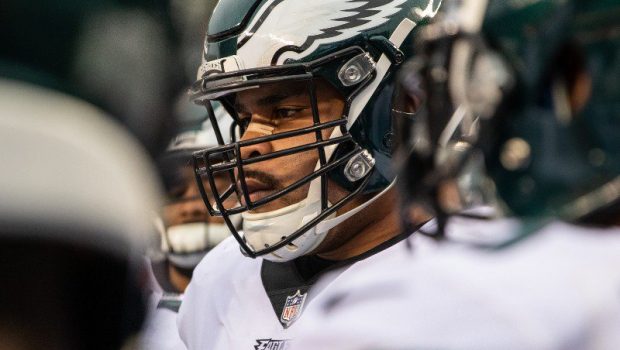 It’s easy to get carried away with the accomplishments of pro athletes, who are praised to the heights for basically doing their jobs.

Some do it better than others.

And then there is Eagles right guard Brandon Brooks:

“I don’t know what to say right now, really,” Brooks told Eagles.com today before signing his four-year contract extension through 2024. “I’m blessed. After my first couple of weeks here when the Eagles signed me (in 2016), I knew I didn’t want to go anywhere else.

“I’m honored that the organization extended me early, with a year to go on my contract. I don’t know, man. I’m kind of speechless at this point.”

The deal is worth $54 million, with $30 million guaranteed, a league source told the Inky.

Most players take more than 12 months before they’re even close to being what they were before the injury.

He started in the Eagles’ season opener against Washington and has been the NFL’s best right guard since.

Pro Football Focus graded Brooks as the best offensive linemen in the NFL entering Week 10. He is on pace for the fourth-highest rating of any right guard in the analytics service’s history. His recovery has been an incredible exclamation point on an Eagles career already filled with great moments – a Super Bowl victory, two Pro Bowls – and now Brooks has another with the contract extension on Monday, giving the Eagles even more stability as they ride the offensive line to great things.

“Since the day he walked into the building, he’s been a consummate Eagle,” Howie Roseman said. “You just see that with everything he does on and off the field. Certainly, you’re talking about a player who is the best at his position in the National Football League, a guy who gets hurt in the Divisional Round playoff game and who works his butt off to get back for this season’s opener.

“He means so much to our football team and our organization and I’m extremely proud to have him with us going forward.”

“I’m blessed and I’m gracious that the organization is doing this for me,” Brooks said. “The good man upstairs has something to do with this. I know that a lot of guys don’t bounce back from this kind of injury. Twenty, 30 years ago, it ended guys’ careers. I’ve had great care here and I’m thankful for that. My outlook was positive from the minute I had the injury. Other than a spine or something from the neck up, they can pretty much put you back together. We have the best doctors and rehab team in the NFL, and it all just worked. Taking it day by day and keeping it positive, that’s why I’m here and why I’m playing the way I’m playing.”

A 2012 third-round draft pick by Houston, Brooks played well with the Texans, starting the last three of his four seasons there. He was a high-priority target for the Eagles in the free agency market of 2016 and the Eagles landed him with a four-year contract. Brooks has teamed with Johnson to give the Eagles a powerful right side of the line of scrimmage. Individually, he was recognized around the league with Pro Bowl selections following the 2017 and 2018 seasons.

In 2019, Brooks has started all nine games and played 629 snaps, 97 percent of the Eagles’ offensive time on the field.

“I think I’m playing my best football,” Brooks said. “My confidence is where it needs to be. Back when I was battling the anxiety deal, and even today I battle it, I used to tell myself that I was good enough, that I deserved to be out here with these guys. Now, it’s more or less, why not be a guy who can be one of the all-time greats? Why not me? You know what I mean? Now, it’s not just that I’m good enough to be out there on the field. Now, it’s I’m good enough to be one of the best.”