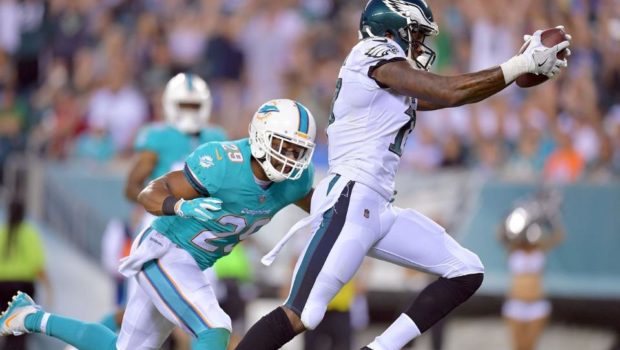 Torrey Smith caught a 50-yard touchdown pass from Carson Wentz Thursday night and Alshon Jeffery (above) added one of 15 yards, giving them the explosiveness they lacked last season.

“I think that can definitely be a big part of the offense,” Wentz said after the game. “I think a guy like Torrey that can run like that is going to open up some things. Whether we actually are completing deep balls or he’s just stretching the defense for some underneath stuff to help out guys in the slot like [Zach] Ertz, [Darren] Sproles, you name it. I think that’s just a big part of the offense we’re going to see expanded out a little more.”

Jeffery’s the more polished receiver of the two, but Smith has the kind of straight-line speed that can make him dangerous without the ball.

And the Eagles lacked that kind of vertical element last year, when they were next-to-last in the league with 30-yard passing plays, with just 11. They had just two passes of 50 yards or more last season.