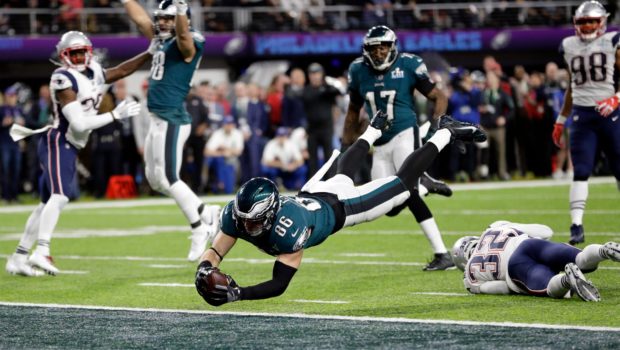 On that decisive fourth-quarter play, the one that ultimately gave the Eagles the lead for good, Ertz caught the pass from Nick Foles at about the 5-yard line. He took a few steps and then dove. When Ertz landed in the end zone, the ball hit the ground and caromed free.

It looked like a catch and touchdown, says the Wall Street Journal. The officials ruled it as one immediately. But anybody who followed football this season had every reason to believe the call could be reversed and turn Philly bars into expletive-filled protests.

Here’s why this play in particular was so maddening: Something nearly identical had happened during the regular season. Both Sunday’s play and the other one were characterized by: a late drive in search of a comeback, a pass to the tight end, a loose ball caused by the ground when the tight end reached into the end zone and a ruling of touchdown on the field.

Both plays went to review: In the first instance, the Steelers saw their score overturned. Pittsburgh fans were outraged. Only the most long-winded explanations about things like what it means to “survive the ground” attempted to justify the decision.

So the Eagles owner and everybody else who has gone their lifetime without seeing Philky win a Super Bowl were understandably concerned that Sunday’s replay review would yield the exact same decision. The only thing more confusing than the catch rule: This one, unlike the other, was ruled a touchdown.

As Eagles wide receiver Alshon Jeffery watched it unfold he was sure it was a score. Then again, he adds, he thought the Pittsburgh one was too. “They need to change that rule,” Jeffery says.

Earlier in the week, NFL Commissioner Roger Goodell said this confounding rule will be revisited. Now it’s even more urgent: The rule didn’t just complicate the Super Bowl once. All of this was exacerbated by the fact that there was an equally controversial catch-rule play earlier in the second half. This one also came on an Eagles touchdown. Foles hit running back Corey Clement in the back of the end zone. But the ball didn’t appear entirely secure as he fell out of bounds. This one was also reviewed—and called a touchdown.

For everyone exasperated at home with no idea what was going on, there was nothing else to think. Not even the guys tasked with explaining all of this to the tens of millions of people watching had an idea.

“I give up,” NBC broadcaster Cris Collinsworth said on-air: