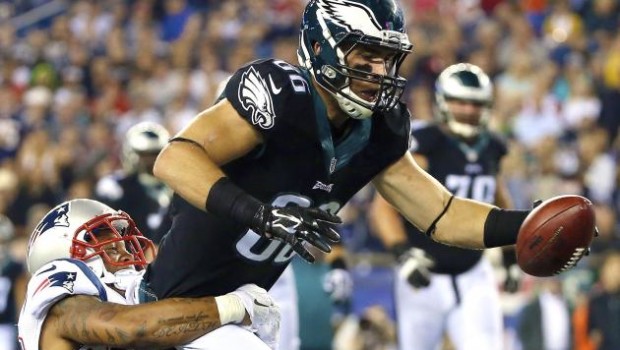 Jason and Justin Sablich of the New York Times, in a prescient article, have rated fantasy stock the way stock pickers do — who is falling and who is rising?

And they characterized two Eagles’ stock for rising:

Jordan Matthews WR — The rookie rebounded in a big way from a disappointing preseason debut, hauling in all 9 of his targets for 104 yards against the Patriots Friday night. A camp standout this summer, coach Chip Kelly said after the game that “the Jordan that we’ve seen in practices is the Jordan that you kind of saw today,” while attributing last week’s downer to nerves. Matthews is slated to start out of the slot as the No. 3 receiver behind Jeremy Maclin and Riley Cooper, but we would not be shocked if he ends up leading this underwhelming group in fantasy points by season’s end. The fragile Maclin has struggled all summer to stay on the field as he recovers from his anterior cruciate ligament injury and Cooper’s skill set isn’t WR1 material.

Zach Ertz TE — Ertz’s ability stood out all week during the three scrimmages with New England, and his two-catch, 26-yard, one-touchdown performance against the Patriots on Friday night was a great way to close out the week. While Kelly has been reluctant to label him the starter over the veteran Brent Celek, Ertz is making a strong case to change his mind. A major mismatch for opposing linebackers and theoretically the Eagles best red zone threat, Ertz is primed to take a major fantasy leap forward in his second season.