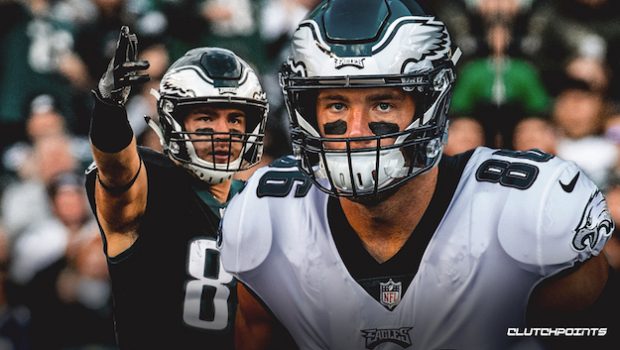 EAGLES ERTZ HAD CAREER YEAR: YOU AIN’T SEEN NOTHIN’ YET!

Eagles tight end Zach Ertz had a career year in 2018, and according to Ertz, he feels the “best he’s ever had in his entire NFL career“.

The Eagles tight end is heading into his seventh season after racking up 116 catches, 1,163 yards, and eight touchdowns (all career-highs).

Before 2018, Ertz missed a few games in the previous few seasons due to injuries. Although, last season, he was able to start in all 16 games in the regular season and both of the Eagles playoff games.

The Pro Bowler is hoping to remain healthy for his second-straight season, and the Eagles are going to need him to produce at a high-level again with Carson Wentz returning from injury this season.

Wentz and Ertz have always had a nice rapport and if both can stay healthy they could become one of the most dangerous duos in the NFL. The 2019 season could be another impressive showing from Ertz—who is feeling the best he’s ever felt in his NFL career this offseason.