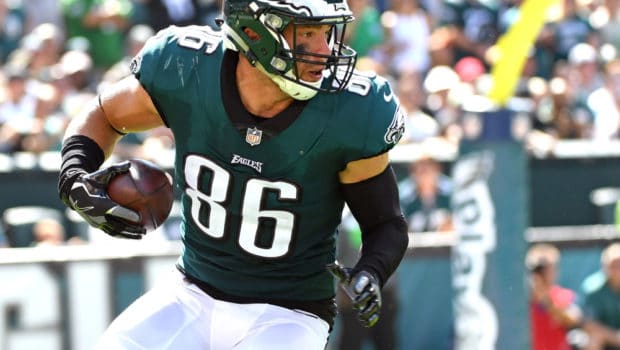 The Eagles have been predictably cagey about the status of primo tight end Zach Ertz for today’s NFC showdown with the Rams at the L. A. Coliseum.

ESPN’s Adam Schefter is reporting that Ertz is doubtful due to a concussion he suffered last weekend against the Seahawks.

Ertz left last Sunday’s 24-10 loss to the Seattle Seahawks with a head injury. He remained on the ground and appeared dazed following a third-quarter hit over the middle by safety Bradley McDougald. Ertz walked off under his own power but was taken to the trainers tent to be tested for a concussion before heading to the locker room. He did not return to the game.

Although he was OK’d to practice Thursday, he has yet to clear the concussion protocol, according to the Eagles.

Ertz, who leads the Eagles in receptions (57) to go with seven touchdowns and 663 yards, is officially questionable on the injury report.

The Rams, meanwhile, aren’t expected to have leading receiver Robert Woods for a third straight week, a source told Schefter. Woods has been questionable on the injury report with a shoulder injury. The source said he is expected back next Sunday against the Seattle Seahawks.